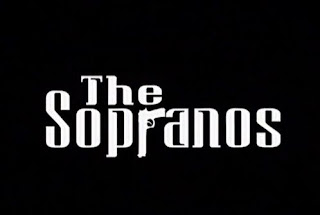 I got The Complete Sopranos Boxset for Christmas, on the strength of 6 or 7 episodes sneakily watched on websites of ill-repute. This was not a mistake. While it hasn't quite taken the crown of my favourite tv programme just yet (it's got a way to go before it surpasses The West Wing in sheer excellence), there are still 5 seasons to go through, so anything could happen!

I think The Sopranos is quite a slow grower as a TV programme, which I mean in only a good way: it takes a while for the full magnitude and meaning of events to be discovered, and you can only see the full effect of episodes once you have seen all of those in the series (this may also apply to the entire programme as a whole, I'll let you know once I've finished with it). There are, however, also stories that remain contained within their episodes, which are just as good as the bigger picture (e.g. the pervert 'soccer' coach who Tony wants to have killed but then is talked around to doing that one the legal way). It's almost impossible to sum up the whole series without boring you to death (a lesser used weapon by the mafia), so I'm just going to give you a little snapshot of the things I liked, gangsters I loved, and mothers I wanted to kill... 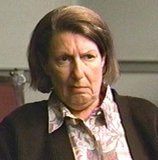 1. Livia Soprano
Ah, Tony's Ma. Helpfully categorised as having a borderline personality disorder by Dr Melfi, I more or less spent the whole season going 'Well, she's a miserable, bitter, manipulative old bitch isn't she?' She's evil, but she also made the entire programme very interesting- you're begging for Tony to come to his senses and see what she's really like, so that when he finally does (in episode 13!) it's extremely satisfying. Ah, but if only he had smothered her with the pillow... 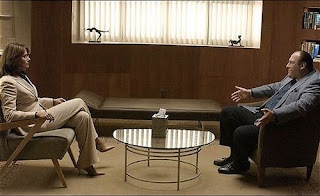 2. Tony's psychiatric visits
I love the whole 'mafia bigshot needs psychiatric help' thing, and I also loved how his visits to Dr Melfi formed the cornerstone of many episodes. It seems to be perfectly plausible that Tony would need psychiatric help, considering his mother, and it really goes beyond a mere Godfather style portrayal of the mafia. 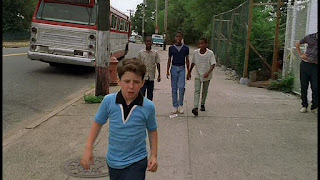 3. The flashbacks to Tony's childhood
I just found the young Tony's discovery of his father's misdemeanours (in 'Down Neck') really touching, and kind of sad, especially the way he seemed to view his own place in the mafia as a prophecy he had to fulfil. Usually used as a way drunks inherit the disease from his parents, Tony refuses to see the sadness in the admission that there was no other way of life for him, but the life of crime. I however did see this, and got all 'poor Tony' about it.

4. Christopher Moltisanti
I love Christopher! I just really do. He's a little bit pathetic, a little bit unsure of himself, and I just want him to succeed a lot. I can see how he's being saved to work his way up throughout the series to a much higher position, and he's certainly worthy of the challenge- he's a pretty tough little guy! That sounded so much more patronising than I intended it to be... but anyway. I also have to question how happy Carmela's sister/brother is that her son is part of this life of crime... but maybe I'll find out later on... 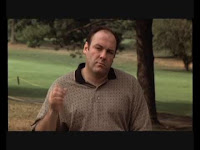 This has to be one of the funniest things I've ever seen. I thought it was just going to be a tiny subplot, where Junior would get teased a little bit and Tony would have a bit of fun. The basis tenets of this were that 1) Junior is really really good at the aforementioned sex act, 2) Junior doesn't want anyone to find out that he is because it would diminish his manly standing as the boss, 3) Tony of course finds out and teases his uncle about it quite a lot, at a golf course. It goes a little something like this:

Junior: The fuck's he talking about?

Tony: I thought you were a baccala man, Uncle Jun. What are you doin' eatin' sushi?

Junior: You fuckin' run off at the mouth, you know that?

Tony: [sings] South of the border, down Mexico Way.

6. 'Isabella'
Possibly my favourite episode of the series (despite the lack of oral sex jokes), I really felt for Tony in his hour of utter despair. I loved the way that he really thought he didn't want to live anymore, but once someone tried to take it away from him, he realised he wanted to live so desperately that it almost seemed like a miracle rather than a bad thing. I was also seriously intrigued by the whole 'Tony fantasising a better mother' thing, even though that kind of hallucination would probably be pretty terrifying. Laughs were even provided by Anthony Junior trying to avoid his first formal because he needed to be home with his family, only to be told that he had to go, and with two bodyguards, no less! Clearly, it's not easy growing up as a Soprano.

7. The closing minutes of Season 1
It would have been really easy to go with a big dramatic ending to the series, a giant gunfight perhaps, or some ordered retribution from Junior who is stuck in prison. Instead, the series ends on a kind of placid, peaceful note, with the Sopranos in a restaurant belonging to the man whose restaurant Tony blew up in the very first episode. I was watching the entire time, waiting for Artie (the restaurant owner) to start attacking Tony, or for someone else to come in and start causing trouble, but in the end it was just Tony and his family (his evil mother having been vanquished) being together, and realising that this is the way life should be lived. It was really lovely.

I could say so much more about The Sopranos not least how great it is that they all love and worship the Godfather films (which I find funny, because I would have thought they would find them silly and unrealistic! But oh well), which are probably going to be my next watches too. Hopefully my new mafia obsession won't get too out of control....
Posted by Laura at 19:55