2015 was, quite possibly, the worst/best year of my life. The terrible things that happened outnumbered the excellent things that happened by a ratio that I'm not even comfortable thinking about, but every terrible thing brought lessons of its own and the opportunity for people to prove themselves to be excellent (which they have this year, in droves) and every excellent thing was a reward in itself. Really, the main and truest thing that can be said about 2015 is that it brought so much life with it that it was overwhelming and wonderful and horrible. Sometimes all at once, usually one of those things at a time.

So. Usually at this point of the year I take part in the end of year bookish survey and talk about my life in books over the year (see: here, here, here and here) but my life this year hasn't been about books (kind of ironically considering the MASSIVE GIANT MA I GOT THIS YEAR OMG DID I MENTION THAT YET?) so much as, you know, my actual life that I've been living to the fullest, almost to the point of overflow. I've tried to write this post a few times and it just gets wordy and tearful as if my brain has constantly had just the tiniest bit too much to drink, so in the spirit of brevity I think I'm just going to make a few lists. Please enjoy this life summary:

1. MA Graduation: I mean. I just. Talk about life achievement unlocked. I guess I didn't even really post here when I got my results, but they were good and my uni let me graduate and I just... There were times, especially after my nan died and after my grandad died this year when I wondered what the point of even doing a MA was (or the point of anything), but the fact was that Shakespeare got me through both of those things even as I had to try and find a way to get through Shakespeare whilst mourning. I got this tattoo in December: 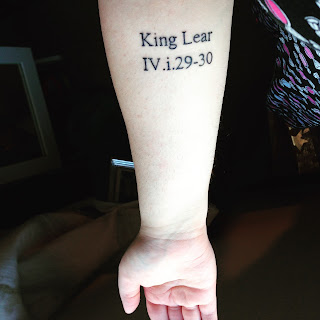 which was not only to commemorate the end of my MA, but also because the line reference is to this: "The worst is not/So long as we can say 'This is the worst'" which to me kind of means, even when things are terrible, and seem to be the worst they can be, you're still alive and mentally present to be experiencing them so you just have to make the best (of the worst). Which is probably one of the most important things I've learnt over the course of this last year, and Shakespeare already knew. Of course he did.

2. Foreign Visitors!: I mean. I've met many people from the internet at this point and always always always they are excellent people. But this was the first year I had visitors from afar (i.e. America and Australia and Canada) and it was so amazing actually being physically with the people I had only communicated with in words before because hugs! They are a language all of their own. Basically I want everyone to have holidays to London so we can meet and hug and NOT go to Harry Potter Land because I went twice in a month this year and, frankly, that was more than enough.

3. Post-Dissertation Life: I lost the whole summer this year to my dissertation, but in September I had all the days off work, I relaxed, I read, I didn't make too many plans and it was the best possible way to destress. My life since September, in fact, has been pretty relaxed in comparison to the rest of the year, and even though I have to look for a new job and generally sort my life out, it's really great to know I'm probably not going to have a life where I have no days off ever, ever again. She hopes.

4. Friends: This is a general thing, I guess, but in the midst of having the busiest life ever, I somehow managed to strengthen the friendships in my life, make new ones and generally build up an excellent network of humans that I wouldn't be without. I guess I managed to do this partly because I was so tired for 9 months of this year that I didn't have any filters, which is a great way to do friendship in my opinion, and also texting people is an amazing procrastination method. Regardless, I am going into 2016 with amazing people around me, and that's the kind of thing that makes me believe everything might really be ok.

Things I Have Learnt About Life This Year

1. It's Ok To Not Be Ok: In the interests of brevity and of not dwelling on badness, I've avoided the worst life moments of 2015, but being a grandparent orphan and that last week before my dissertation was due in are pretty much that. At none of these points was I even remotely ok, but I also didn't try to pretend to myself that I was- I just tried to make it through with as much grace as possible, and really that's all we can do ever, right?

2. Other People Are Awesome: This shouldn't be a revelation at all, and of course I've known awesome people before this year, but I've always had a little bit of trouble accepting, or rather asking for, help from people. This year I've really had to ask for help at times, and it's always been given without complaint or comment and seriously, I've made some really good friends this year, without whom I think I'd be in much worse shape.

3. Hard Work Pays Off: But really. Really really hard work leads to achievement which leads to a pride in self that I haven't had since AT LEAST the last time I got a degree. Even if you're not entirely sure what you're working towards, the working itself is almost always worth it.

4. Not Everything Will Be As Terrible As You're Expecting It To Be: This Christmas was one of firsts and lasts- it was my first with no grandparents, and my last at my nan and grandad's house (which has been sold but not completed, hence why we could have Christmas there). I can't even think about the fact that we won't even go past that front door in a couple of months when it's the setting of so many of my childhood memories, but I was expecting Christmas there to be so hard when in fact it was just... Christmas. I was still with a lot of my favourite people, the food was still great, and whilst I wouldn't say I was full of cheer, I was basically ok. I guess this point could also be called 'you can get through almost anything' and that's true too.

5. I Am Kind of Great: I know this sounds bad. I do. But I am so fucking proud of myself for getting through everything I have this year that even thinking about how fucking proud I am makes me cry a little bit. I have found reserves of strength within me that I didn't know were there, and I've done and gotten through so much that, yeah. I'm pretty proud of me.

Things I Have Learnt About Death This Year

Death is weird and defies any kind of list of lessons about its impact. I can't even describe how much I have missed all of my grandparents over the course of this year, and I can't tell you how the missing of them never really gets any less but actually increases as you remember exactly how they used to be, alongside the fact that you can't see them anymore. I'm not sure I will ever not miss them, but I will at least carry around the knowledge that I had the best grandparents forever and ever. Here is the one thing I'd like to think I know about death: if there's anything that helps with the grief, it's knowing that you didn't part on bad terms, that you loved each other as well as you could, and did everything you could for each other. To me, that's the only thing that makes any of this even close to ok, really.

Things I Have Learnt About Boys This Year

1. ...
2. ...
3. ...
4. Ok, so I don't think I understand boys any better than any other year, but I've had more to do with them this year than any other! Mostly they have been terrible and not worth my time, but occasionally it's been slightly more than worth it.
5. But seriously, if anyone figures boys out, can they please let me know? K thanks bye.

And that was the year. This post became a lot longer than I intended, and I know, TL:DR, but still, it's there for me when I need it, and, you know, for posterity and shit. Having said all of these things, I couldn't be happier that this bloody year, which has not been great for basically anyone I know, is ending, and I really and truly wish everyone all the best for 2016. *raises glass of prosecco, kisses everyone in sight*
Posted by Laura at 12:00 9 comments: