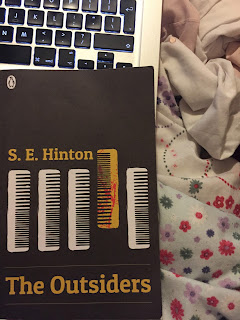 That's really the good stuff in this book, and even though the storyline is also pretty engaging and exciting and kept me entertained on a train journey, I'm really all about the understanding that literally everyone has individual experiences and ideas and can't be treated as a mass idea. So, come for the cult novel, stay for the engaging story, appreciate the awesome world view and be grateful that I told you it's totally ok to read The Outsiders. You're so very welcome.
Posted by Laura at 08:30 2 comments:

Diiiiid I fail at blogging in January? Of course I did. But did I read some things? Well sure, a few. I actually only finished three books all month, about which I will only say that getting a boyfriend is really really good for happiness, but pretty terrible for reading. Actually, I'm going to say more things because he can't be held fully responsible- I have also had a terrible cold/flu type thing that meant I had to have all of last week off work, and just, you know, life things and stuff.

I also may only have finished three books, but I also read the majority of my next Stephen King, I just couldn't quite finish the last story in it, so that totally counts, right? Of course it does. 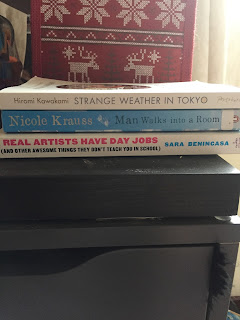 Such a tiny pile... But anyway! Reading yay! Have some descriptions:

Sara Benincasa is really just such a delight, and I asked for this book for Christmas immediately after finishing Agorafabulous. I got it on Christmas day and started reading it not long after, and it is pretty great. It's essentially 52 essays about being an artist, and life, and ways you can live well and think about yourself and your actions and basically just generally ways to be a better human, or to deal with other humans better. It's Benincasa so there is of course some autobiographical stuff, but it's mostly all good life advice from someone who definitely sounds like she knows what she's talking about. I wouldn't say that every single essay was a killer but there's a lot more good than bad, and I really want to give this book to everyone I know to make them feel better about the world and life and stuff.

Man Walks into a Room by Nicole Krauss

I think Nicole Krauss is a beautiful writer, but I also have a thing where I remember enjoying her books as I consume them, but can't remember much about them if I try to think back. This is pretty ironic considering the narrative of this novel, which involves a man who has complete memory loss post age 12. It's an interesting book because it's told entirely from the amnesiac's perspective, so there's no sense of his wife's loss and sadness, and that means the novel can really focus on the nature of memory, and what it means for a person's place in the world and sense of context about the world. Very interesting stuff that is already fading in my memory I AM SORRY NICOLE.

This book is great. This is a Japanese love story, which to me essentially means that two fairly lonely and sort of strange people work through their feelings and manage to somehow get it together, all whilst eating amazing sounding food and going to markets and mushroom hunting and just generally having a fairly whimsical time. I don't think it's a surprise to anyone that I like Japanese literature, and this was no exception- it's much weirder than it needs to be, and as a result is much more interesting. I would say short and sweet, but it's much more odd than it is sweet, and that is probably why I liked it so much.

So yeah. It wasn't a huge reading month, but I enjoyed all the things I read AND I have a 100% female reading record so far this year which, for me, is obviously a giant win. Onwards through the year, my friends.
Posted by Laura at 10:56 4 comments: