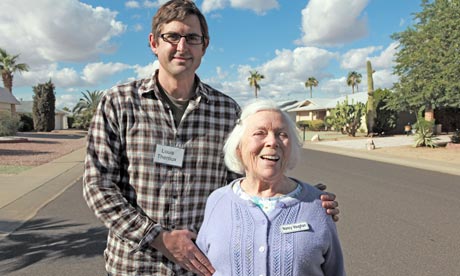 I don't know if you know who Louis Theroux is, but he's basically my favourite British documentary maker, and every time there's a new film (well, I say film, they're usually an hour long, but film will do, right?) of his on the BBC, I get very very excited beforehand and there may be some excited squealing of some sort. Ok, there is. This time around, there were two (TWO!) documentaries, each focusing on the difficulties faced by families when dealing with mental problems in those they love, namely with autism and dementia. Last night's was about dementia.

Before I watched it, I was really apprehensive because I didn't really see how a programme featuring real people (both sufferers and their families) dealing with dementia could be anything but massively depressing and maudlin and just terrible- looking for tears in the worst kind of way, whilst mildly exploiting the people who are suffering. This was a very foolish feeling I had, because I forgot that this is Louis Theroux- the man who goes looking for the humanity in white supremacists, and who visits America's most dangerous prisons (in Miami, apparently, in case you were wondering) in order to try and just get some kind of idea of what the hell goes on there, and why, exactly, the prisoners are there in the first place.

With this documentary, of course, there aren't really any whys- dementia is one possible consequence of aging, and there's no real telling who it will strike. Visiting Phoenix, Arizona, apparently the retirement capital of the US (hands up who thought it was some city in Florida? Because I totally did), Theroux gets to know the families of the sufferers as well as the sufferers themselves, and it's kind of wonderful, and it's kind of heartbreaking, but it always avoids being maudlin or over-sentimental. There are moments of real humour, not at the expense of the sufferers or their families, but with them- Louis strikes up a rapport with them, as he always seems to do, and gets included in their lives and jokes, and so we are too. Above all though, this film deals with the realities of people facing dementia, and with those people who love them.

And, like, people are so wonderful. All of the sufferers Theroux spoke to had family members who love them and just want them to be happy, in whatever way they can. There was this one guy who doesn't remember that he's married, and yet his wife still visited him in the care home and just accepted whatever he could remember and the things that he said to her. Obviously it must be heartbreaking for her, but she faced it all with strength and understanding and was just basically wonderful about it all. And then there was the 80-something man who cared for his wife at home, because they couldn't afford a care home and because, well, he loves his wife (who was a wonderful little old lady, dementia or not!) And he has to do things like bathroom duties for her (I don't know a more sensitive way of saying that she basically wears a diaper) and he does it uncomplainingly, because he loves her. Aren't you just getting a bit choked up now?

Most upsetting of all was the 49 year old woman with dementia, not least because she had a nine year old daughter, and so has to face the fact that she's not really going to see her grow up, or at least that she's not going to remember seeing her grow up, or possibly even remember her. There was one part of the film where her husband said to her that the doctor had said that she might not recognise his or her daughter's face within 2 years, and their reactions to that were so upsetting (I had a little cry), and what made it even worse was Louis' reaction- the camera looked over at him after he'd said this, and Louis' face (which wasn't looking at the camera all like sympathetically and annoyingly and grossly, which would have made me throw up) was just the saddest face- he did a little swallow and he was clearly trying not to cry. And obviously I realise that his pain is waaaay not as important as that couple's, it still made me appreciate his empathy and kindness towards the people that he films.

In conclusion, I love Louis Theroux and I love the TV he makes. I still don't know if you have a clue who I'm talking about (I guess you're most likely to have seen him on BBC America, if that's even still a channel... I have no idea basically!) but if you have the opportunity to watch any of his documentaries, please take it. Because even when he finds himself in the strangest situations (his time at a brothel and with swingers comes to mind) his love and understanding for his subjects always comes through. And that's why I love him.
Posted by Laura at 16:38