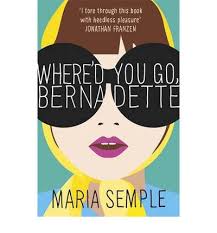 Everyone who's awesome in Blogland (Ok, I can basically think of three people, but that's plenty, right?) has been enthusing about Where'd You Go, Bernadette, and when I went to the library to get True Grit I saw it in the award winning books section (Or something... Some non-shelfy part, anyway) and, well, I just don't know how to resist the advice of the awesome people of Blogland OR a cover that awesome. I don't. (The fact that I got two books out of the library and read both in a week when I have 200+ unread books at home is the reason I'm no longer going to the library, but that's another story.)

Despite the enthusings of said awesome bloggers, I somehow managed to miss the part where Bernadette is an epistolatory novel, told mainly in the form of notes, emails, letters and transcripts, and I doubt if I've mentioned this because I read books like this so rarely, but I LOVE IT WHEN BOOKS DO THAT! Seriously, I love watching a story unfold through tiny pieces of information from all different perspectives until you finally get a clear picture of everything that's happened. It's awesome.

So that, combined with the fact that the author wrote for Arrested Development (!!!) really made me very excited about the book from the start, and then it went and got all interesting, too. What I find the most interesting about it, is, since it's called Where'd You Go, Bernadette, you'd almost expect her to disappear early on in the book and for it to be about the search for her. Instead, and I think this was is better, she doesn't disappear until about 3/4 of the way through the book, and the thing you have to piece together (which is what her daughter, Bee, is trying to do with the whole book) is the why she went rather than the where she went. And I think this way, you care a lot more about finding Bernadette and where she did, in fact, go.

And I did totally care about Bernadette- she's an extremely flawed character and she does a lot of things I don't really approve of (and is SO. MEAN. about Canadians!) but in the end, it's difficult not to like her. She's funny in a sort of bitter, misanthropic way (so, the best way) and it becomes clear that a lot of the things other characters (MEAN characters) don't like about her, and things I wasn't necessarily thrilled with, stem from past traumas which have been truly damaging. I really feel for her, is what I'm saying, but my liking her isn't just based on sympathy, it's based on her actual awesomeness as a character.

Her daughter, Bee, is a lot easier to straightforwardly love, though, right up to the point where Bernadette goes missing when she becomes somewhat of a nightmare (albeit, kind of understandably). She also engages in some heroics near the end that redeem her basically completely in my eyes, which is why I can fairly easily say I love her. And then, there are all the other characters- flawed and horrible and then lovely and complicated and just extremely real in their complexity. Many of them are able to justify their actions to themselves, even if WE (who are essentially on Bernadette's side at all times) don't really approve of them, and isn't that just what people do? I know it's what I do at times. Actually, the majority of this book isn't so much 'Where'd You Go, Bernadette' as 'Bitchy and Snobby Housewives of Seattle are Snobby and Bitchy', and this is excellent because I love hating characters almost as much as I love character redemption, and this book has both of those in bucketloads.

A final thought- what is it with authors including The Beatles in their books at the moment? Admittedly, I only have Eleanor and Park as my other example, but still it's like these authors are daring me not to like their book. It's like, 'oh, you're not entirely sure how you feel about Bernadette? Well, she knows all the words to Abbey Road so BAM.' And it totally, totally works- The Beatles are kind of a weak spot for me (as I can only assume they are for Rowell and Semple, too) so keep including lovely words about them, authors, and I will keep reading.

So obviously I can tell you're just dying to read Where'd You Go, Bernadette now, because THE BEATLES! SHE KNOWS THEY EXIST AND SHE MENTIONS THEM! but really and truly it's so very entertaining and funny and has a wicked awesome structure, WHILST at the same time it doesn't make your brain feel like it's turning to mush. Mostly it's just purely entertaining, but it's also very well written- every character has a distinctive voice and your view of pretty much all of them shifts the more you read. Basically it's awesome, and hey, you try resisting that cover. It's practically impossible.

Note: Can anyone think of any more modern books written in this format that won't make my brain feel mushy? I can think of some classics that are basically in letter form, but I'm thinking more with the emails and snippets of information and things. I need more of this in my life!
Posted by Laura at 08:44