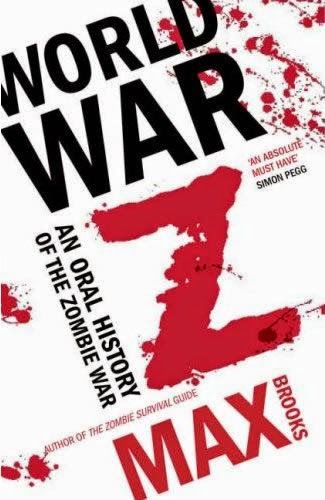 "Most people don't believe something can happen until it already has."

This post marks the start of what will unofficially be known as Accidentally Alley's Week. That is to say- I'll be reviewing two books that I preeeetty much only read because of her enthusiasm for them, and which I happened to read kind of near to each other, only not really because I TOTALLY FORGOT I hadn't reviewed World War Z yet and the draft for this post has been sitting sadly backstage on the blog for ages now. Poor little post.

So, World War Z is amazing. I've said for a long time that I don't really care for zombies, but I keep on reading zombie books and I keep on liking them, so who can say how true that really is? It's probably not true at all, but it wouldn't matter anyway because World War Z isn't reaaaaally about zombies.

Obviously zombies are involved. They are indeed the Z of the title, but it's the subtitle that's the really interesting part- An Oral History of the Zombie War. An oral history it is indeed (Alley seems to listen to the audiobook about once a month, and now I know why- I can already tell that the audiobook would be SO GOOD) and that's what makes it so special, and so excellent.

Here's why I think the multiple (and I mean multiple. Like, basically every account is from a different person) perspectives thing works so well. Brooks has clearly thought A LOT about every aspect of what a zombie invasion would involve, which means that the book covers government reactions, and attitudes beforehand, how the lives of ordinary people were affected, the global reaction, the battles... basically every area of what you talk about when you talk about any war is covered, and it's covered with detail and realism and it's so so so interesting and good and completely makes you forget that this didn't actually happen because IT FEELS LIKE IT DID.*

I think we all know that this is going to end with me going READ IT (and honestly, if you read the first account then I don't know how you're going to be able to stop, because it's so creepy and perfect and YES) so instead of gushing too much about it, I'm just going to talk about a couple of my favourite sections in a bit of detail. This will involve spoilers only in as much as I'm going to talk about stuff that happens in the book, because I'm not really sure it's one you can spoil. Unless you didn't know that zombies were involved, in which case, whoops!

SO. One of my favourite parts was set in Japan, where a teenager who pretty much lived on the internet had to learn how to live in the real world where actual bad things were happening and everyone was dying. I liked this a lot because it made me think about the way we live, all connected to the internet but not even necessarily connected to the people around us (it took this guy days to realise his parents are dead) and how, even though this was an extreme example, we could all take more time to look away from the screen and go 'Shit. Things are happening. I should probably do stuff.' The personal development of this character is excellent and I liked the part he had to play and also did I mention it was in Japan? So, yeah.

My other favourite part was the bit with the guy who marketed a 'vaccine' for 'African rabies' that he duped innocent/ignorant people into buying, believing it would make them safe, and that it wasn't something they were going to have to think about. To be clear, I think this guy is an abhorrent piece of shit, but I really appreciated this part because THIS IS TOTALLY WHAT WOULD HAPPEN. EVERY time there's a pandemic style scare (avian flu, and the like) the government makes a big show on how it's stocking up on vaccines, only, if this is a new strain of virus that's especially deadly, I don't think it's quite that easy to have a vaccine ready. Still, we all relax, don't think about it, and one day that could easily be our downfall. Only, hopefully not in a World War Z way, because JESUS CHRIST that would be scary.

Seriously. This book is amazing. Brooks has thought about everything, has made his vision of a zombie war so very realistic and well thought out that you end the book thinking 'so... Maybe this could happen.' Which is terrifying, but also INCREDIBLE. I can't overstate how much I purely enjoyed reading it, and I also can't overstate how impressed by it I remain. It's just some damn good book, guys. If Alley hasn't made you read it already, you've got to read it. I will not rest until you do.

*I only know it didn't because I'm still alive. I would totally be zombied up first.
Posted by Laura at 08:30