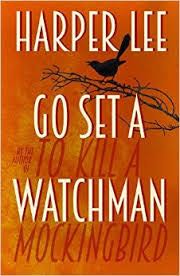 As you may have noticed since you're probably a fairly literate person (you're reading a book blog, hello!), Harper Lee's sequel-that-was-actually-written-before To Kill A Mockingbird is due to be released next week. My feelings about this have swung grandly from OH MY GOD to ohhhh crap old lady exploitation, but since it was first announced, I really haven't thought about it too much. I can't really pick a favourite book because OH GOD THE STRESS, but if absolutely forced to, I'd probably pick To Kill A Mockingbird, so both my expectations, and my readiness to be disappointed are kind of high for this book.

Yesterday, The Guardian published the first chapter of Go Set A Watchman, and GO AND READ IT NOW because we are going to discuss this thing. Intently. You good? Good. SO. (And, this should really go without saying but SPOILERS APPROACHING) my initial reaction to anything in this chapter was OMG WTF JEM IS DEAAAAAAAAD! I honestly and truly, upon reading that sentence, felt like someone had killed one of my really good friends. It's almost unbearable to think that, as Lee was writing To Kill A Mockingbird, and making Jem awesome, that she knew he was going to die young. That he had already, in fact, died young. Atticus is old and frail, Scout is a grown up and kisses boys... It's a lot to take in!

Above all else, I think what this one chapter has made me realise is that everything from To Kill A Mockingbird- the characters, the setting, the general fricking amazingness- has been internalised into my entire being so that the death of a fictional character (a death that happened before his childhood was even written) could actually come as a great shock. I settled into chapter one of Go Set A Watchman so easily because these are my people, and I love them, and regardless of what might happen to them, I just want to know what that might be. They've travelled so far beyond the page in my mind that they've become almost like real people, and as long as they act consistently and comprehensibly, I want to see how that unfolds.

Immediately after reading chapter one, I preordered the book. My ambivalence and unease about reading it has been replaced with the desire to JUST KNOW what happens to these people (characters... Whatever...), and I'm really excited to neglect my dissertation once again to read it. Just this morning, I've kind of swung back the other way since I read this fuller idea of the plot (Atticus, whyyyyy?) but I reserve the right to filter out of my mind any undesirable things that might happen. There is a reason, after all, that this is not the version of these characters we were really meant to see, and whilst I'm excited to read it, I will do so with a protective layer of bubble wrap around my mental concept of these characters and their 'real' story.

To summarise: my excitement is now high, and my potential for heartbreak is through the roof. And yet, this is why we read, amiright? I know I'm right.
Posted by Laura at 08:43