Sunday Sundries: BE IMPRESSED WITH ME

Honestly, I'm sure you're just impressed that I'm doing a Sunday Sundries post at all (THREE POSTS IN A WEEK, WHAT EVEN?!) but I am about to impress you EVEN FURTHER by showing off my skills and whatnot.

So. I think I mentioned in my last post that, in spite of not having to do Shakespeare anymore, I failed to read much in the last third of the year. This was not only because my poor brain needed a rest, but because for some strange reason, I decided to make (MAKE!) basically all my Christmas presents this year. This entailed a lot of truffle making and gingerbread baking, but I also wanted to make nice things that people could keep. These included a blanket for my cousin's baby, hats for some of my friends (I can essentially only knit blankets and hats, just btdubs), an iPad case for my mum, a box of recipes for my sister, and those are just the ones I don't have photos of!

Here are the things I do: 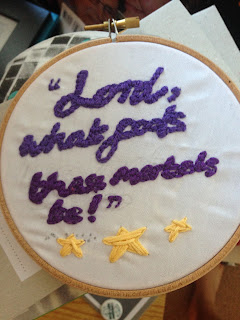 I made this embroidery for Alley who was my Secret Santa-ee in one of my internet groups this year, and I am really proud of it but looking at it also exhausts me because it took literally a whole day to make because I am a fool and made my letters too chunky because I forgot completely how time consuming embroidery is. ANYWAY, in case you didn't know, this is a quote from A Midsummer Night's Dream which I happened to know is Alley's favourite Shakespeare so that... is the reason for that. 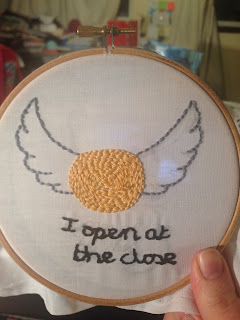 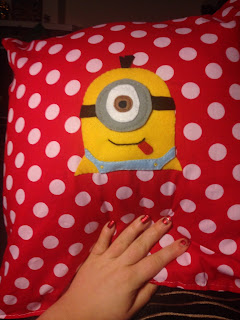 I made a Minion cushion for my cousin's kid, not because I like minions (I kinda really don't) but because he basically asked me to and I love the kind of inspiration where I don't have to think but merely have to find a drawing of a minion and then make one out of felt. I didn't even have to embroider anything! 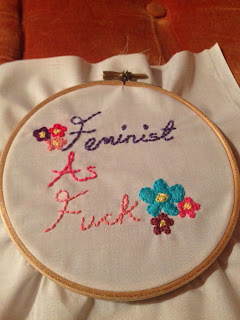 I did have to embroider this for my best friend, and it was actually really fun to do, even though as I made it I had both my mum and auntie go "but... She won't be able to hang that anywhere!" I'm not entirely sure where Frances plans to hang it, but I'm sure you'll agree that the F-word makes a delightful addition to any home!

I am proud of all of these little made things, but no piece of work has inspired as much praise, nor am I as proud of anything else as I am of this: 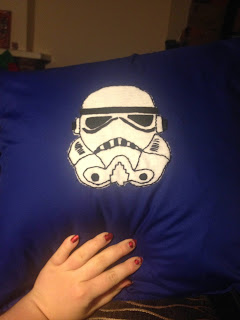 IT IS A STORMTROOPER CUSHION. I may not have seen Star Wars (I know, don't start) but I know that this is a bloody good stormtrooper, and it had better be because its the only thing that took anywhere near as long to make as Alley's embroidery. This now resides in my sister and her boyfriend's flat (the cushion was for him) and I'm clearly going to admire it every time I go round there, for real.

So there you have it. You're allowed to just be super impressed with me, I know I am. My main aim of the enterprise wasn't really to save money (although I probably saved a little?) so much as to give gifts that I put time and effort into, and that meant a bit more than something I just bought from a shop. It also meant I could give a little something to all of my family- I don't normally get anything for my aunties or cousins really, but because I was making gingerbread, it made sense to make it for everyone rather than just my immediate family, because the extra effort there was minimal. The presents that maybe cost me the least, meant the most- for my sister and cousins (and myself) I made cushions out of my grandad's old shirts, so that even though we don't have him anymore, we always have something of his close by. I was really happy that I had even the basic skills (and cushion covers are as basic as it gets!) to make these so that we all have something of his to keep forever.

Essentially, this: deciding to make almost all of my Christmas presents kept me almost fully occupied over November and December, was pretty tiring (but not to a Shakespeare level!) but ultimately so rewarding that I reckon I'll be making at least some of my Christmas presents for years to come. Now I just need to learn how to do things that aren't cushions, or hats, or embroideries...
Posted by Laura at 08:30