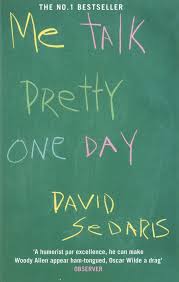 I have honestly owned this book for the longest time. Eons and eons of time have passed since I bought it from who knows where, for who knows how much, and for who knows what reason. I thought it might have something to do with Alley from What Red Read because Sedaris seems like her sort of guy, but having just gone to her review of this (from FIVE years ago, nice remembering brain) I have left a comment saying that I already own this so that is super mysterious. I also said that I should probably read it... 5 years ago... Yeah. Best not to dwell.

I have read it now! It's very very funny. VERY funny. I read most of it on a couple of train journeys and I think I may have giggled out loud a few times (in public) because it is very very funny. This is probably a good thing, because it's a collection of comedic essays, and they're pretty much separated into two sections- the first is general essays about funny things that have happened in Sedaris's life, his madcap family etc etc, and the second is about his life in France as a non-language speaker and some of the hilarious things that have happened with that. I was actually super charmed by the title essay, which outlines his experiences in french class (not great) (but funny) and me talk pretty one day is essentially the level of grammar he and his classmates could achieve in the language, but trying to comfort each other about it all the same.

Funny as I think Sedaris is, though, it's his sister Amy who was the real star of this book for me. I always forget that I know who Amy Sedaris is (she had a small role in Sex and the City and Elf and you've probably seen her in lots of other things but those are the two for me), I guess mainly because she has such tiny roles, but she sounds ridiculously funny. Sedaris describes her exploits and I just want to be her, because it sounds like she doesn't have those useless feelings of self-consciousness and, I don't know, shame, which is what I try to embody in life (I don't have a filter, like at all) but even I'm not shameless enough to imply my brother is a rapist on public transport and then hop off and leave him to it. Although maybe if I had a brother...

New (and probably terrible) role model aside, this book is fab. If you too, for some mysterious reason, have left this sitting on your bookshelves for years and years and years, you won't regret picking it up and reading it - and if you do then just stop reading it, nobody's going to force you! Life is good and also funny, and don't you forget it!
Posted by Laura at 08:00