Well howdy there, friends! Only 9 days into August and I'm wrapping up July, and hasn't all summer felt like that so far? I can honestly barely remember what I did in July at all (I think there was... stuff? And also things) and we're already basically a third of the way through August and... yeah. Have I been doing useful and worthy things? I doubt it! But I have been to my oldest friend's wedding, and also to the Summer Bookshop Crawl in Bath (last weekend, it was ace thanks for asking, yes perhaps I will do a post about it... in October) and also working and sleeping and, you know, all of that good stuff.

But what did I read? 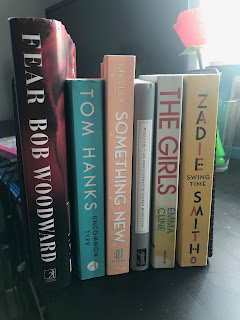 These guys! The strangest thing about July is that I felt like I hardly read anything at all (still facing that Sims addiction, which is somewhat abating now) and yet I still finished 6 books - mad! I'm having trouble at the moment dedicating actual time to reading that isn't travelling time, because it always feels like there's something 'better' to do - this sometimes means The Sims, or TV, or (pertinently!) crafting wedding type things whilst watching TV. This is fine, life is long, etc etc, but I do miss fully dedicating myself to reading so I'm going to try and work on that.

Failing that, I am travelling somewhere for the next 3 out of 4 weekends (at least!) so... there really is plenty of reading time coming up anyway!

Fear by Bob Woodward - This is Bob Woodward's book about Trump, something which I started reading not long after I finished my Obama book (SO GOOD) and then really had to drag out because, ugh, who wants to spend their spare time reading about Trump? I feel like this was written before Trump's latest, really extremely heinous actions, which only means that is less of a selection of heinous acts for this book to talk about, but still, you know, a lot. What it mostly left me with is a sense of a man who has a complete lack of integrity or intelligence, and whose bottom line is only the economy, regardless of all advice to the contrary that he could, and should be listening to.

Uncommon Type by Tom Hanks - This book starts with a dedication to Hank's wife, and a thank you to Nora Ephron (no, I'm not crying, YOU'RE crying). I think I asked for this last Christmas because I like Tom Hanks and I like short stories, so what could go wrong? Turns out, nothing - this collection was actually so good and interesting and, I thought, gave the kind of insight into regular people that I didn't know movie stars could have (although Tom Hanks is maybe the least movie star-ish of all the movie stars). It was a really good read, and definitely worth your time.

Something New by Lucy Knisley - Why yes, I have already read this this year, and chances are I'll read it again before my wedding. IT IS 'RESEARCH', OK?!

William, An Englishman by Cicely Hamilton -  I get the point of this book - war is futile, English people are stupid and should realllllly learn to speak the language of countries they visit- but I didn't really like it. I didn't find it engaging, really, and mostly I just. Wanted. It. To. Stop. (Probably much like people felt about World War I, which is the backdrop and also main point of this novel). I found it a little too anti-protest for my liking, and just very very grim. Not my fave.

The Girls by Emma Cline - This was also not my fave (maybe this is why I haven't been reading much lately!). This is a novel about a girl who sort of joins a cult but doesn't fully commit to it, and whilst it has its moments (mainly its feminist musings about the forced sexuality of teenage girls) it also has one of those teaser plots that takes the longest time to get to the point, and once it has you... don't really care anymore? It's not terrible by any means, but it's also not a book I would be aching to pick up again, which is a shame because... hippies! Cults! What could go wrong?

Swing Time by Zadie Smith - Zadie Smith is my absolute QUEEN, and bless her heart for saving this reading month. Sort of like The Girls, the novel starts with teasing the ending, but unlike The Girls, it doesn't go on about it for the entirety of the book. Instead, Zadie tells her main character's life story through her friendship with another girl, both with the kinship of being mixed race, but with very very different paths in life. Zadie Smith hasn't disappointed me yet, but this was really just stellar - I still feel now like this actually happened, like both these girls are real, because UGH SO GOOD. Seriously, have you read any Zadie yet? If not, what are you waiting for?!

And that was my month! Looking at it now, I can see that actually I didn't read very much at all - the first two books were finished in the very early days of July, Something New is a comic book so only took a few hours to read, so really throughout the month I read 3 books, so... yeah, that feels right. Ah well, at least there are all these other months to right these wrongs!
Posted by Laura at 15:28