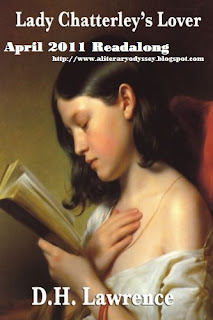 I was reading Lady Chatterley's Lover to join in with the April readalong on A Literary Odyssey, and, considering that it's only May 1st, and like two days ago I was on page 70-something, I don't think I've done too bad in my posting of this! (This is more of a reassurance to myself rather than anyone else!)

So, yes. Lady Chatterley's Lover. I had actually read it before, but I definitely either wasn't paying attention to it, or just completely remembered it wrong, because I definitely thought that the ending was different, and that there was a lot more stuff about coal mining in there. It was also a lot better than I remembered- I don't know if I perhaps read it when I was too young, (I had this habit of reading books that were way beyond my emotional and intellectual scope, leading me to hate them for ages- Pride and Prejudice and Wuthering Heights when I was about 12, to name but two!), or if I just lacked the kind of fatigue and sickness at the way of the world when I read it, but this time it really spoke to me...

Let's talk about characters, shall we? I can pretty easily split this book right down the middle into people I like and people I don't, and Lawrence really makes it pretty clear that this is the way we should be feeling about these characters. On the side of the liked, there is Lady Chatterley herself (or, as I prefer to think of her, Connie) and Mellors, the aforementioned lover of the title. I think the two of them are quite clearly set up against Sir Clifford (Lady Chatterley's husband) and Mrs Bolton, who, in the little notes I made whilst reading, I simply put 'I really hate Mrs Bolton'. I still dislike her a fair bit, but on balance, at the end of the book I really hated Sir Clifford and his pathetic neediness and cold dead soul the most. What really separates the two pairs, above all else, is the way they approach the modern world and he way they react within it. Sir Clifford and Mrs Bolton accept it for the way it is, and work within it, whereas Connie and Mellors try to turn away from it, and live in a simpler way, in sync with rather than in contention with it. Their relationship celebrates and glorifies what is natural in the world, which is in direct opposition to Connie and Sir Clifford's relationship, which contains absolutely no sex at all. Mellor's dislike of the modern world is perhaps best summed up with this thought:

And what then? What did life offer apart from the care of money? Nothing."

Mellors chooses to opt out of this whole system, and in doing so makes himself irresistible to Lady Chatterley, who is essentially bored with the life she is chained to, and more than anything exasperated with the way that Sir Clifford lives:


"She was angry with him, turning everything into words... How she hated words, always coming between her and life: they did the ravishing if anything did; ready-made words and phrases, sucking all the life-sap out of living things."

It is made perfectly clear, then, that Lady Chatterley and Mellors need each other in the worst kind of way, if only to have someone else to cling to while the rest of the world becomes mechanised and awful, and while Connie needs so much more than her husband is able to offer her.

While I was reading Lady Chatterley's Lover, I couldn't help but be reminded of F Scott Fitzgerald, hardly surprising since he and Lawrence were contemporaries, but there is the sense that, at a time when everything is supposed to be all about fun and enjoyment, how much darkness there can be hiding underneath all of this. In the very beginning of the novel, in fact, I was shocked at how utterly depressed and hopeless Lady Chatterley was when, to put it bluntly, she wasn't getting any! While this abated somewhat, there remained the sense that, while everyone seems to be having fun all the time, underneath the surface of things, nobody really is:


"It was pleasant in a way. It was almost enjoyment. But anyhow, with all the cocktails, all the lying in warmish water and sunbathing on hot sand in hot sun, jazzing with your stomach up against some fellow in the warm nights, cooling off with ices, it was a complete narcotic. And that was what they all wanted, a drug: the slow water, a drug; the sun, a drug; jazz, a drug; cigarettes, cocktails, ices, vermouth. To be drugged! Enjoyment! Enjoyment!"

I get the sense that, at least as Lawrence saw it, the 1920s were quite a hollow and empty time, one in which the pursuit of happiness was everything, and achieved by nobody. But maybe that's only true of people who thought too much...

As I'm pretty sure we all know, this book was probably the most controversial of the twentieth century, and it's pretty clear to see why. At one point of the novel, whilst still not offended by all the sex (having read American Psycho, I think I'm pretty immune to being offended by anything, EVER AGAIN!) I was kind of thinking, 'Can we just get on with the story now please?!' It's not that I care whether there is sex in the books I read (more often than not there is, and interestingly enough it hasn't killed me with shock yet!) but when it has literally no narrative value, I tend to get a little bit antsy. Don't get me wrong, it is clearly necessary for Lady Chatterley to get hers, and it really shows a closeness in her relationship with Mellors that is impossible in hers with Sir Clifford. It is also really interesting to discover that, sex in the 1920s? Not all that different from sex in the new millennium (and, I expect, sex has pretty much always been the same.) So, since I don't really believe in censorship at all, I definitely don't think this book should have been censored, but, as a personal thing- there could definitely have been less of the same thing, and more of the whole depression/emptiness thing. But that's just me! Oh yeah, and I give bonus points to Lawrence for using 'the C word' as a compliment rather than an insult, in the glorious and reverent way it should be used (it gives life, guys!) rather than reducing it to a horrible person. Good job, D H!

On the whole, I'm really glad I returned to Lady Chatterley's Lover, if only so I know how the story actually ends, instead of the garbled crazy version that my brain made up! But no, really I was able to go way deeper into the story than I had before, and got a lot more out of it then I had before. Also I have a newfound love for Mellors, and I think I might want to marry him, for this comment alone: "'I don't like people.'" I'm with you there Mellors, all the way (apart from YOU, dear reader! Of course!)

Have you read Lady Chatterley's Lover? Let me know what you thought about it in the comments!

WARNING: I nearly forgot. But if you have the Penguin Popular Classics version of Lady Chatterley's Lover, then seriously DON'T read the blurb on the back- it honestly gives away the entire story in a single paragraph, which is quite a rare and completely ruining feat! Just sayin'.
Posted by Laura at 19:22