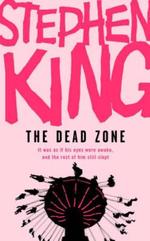 The Dead Zone ended up being a lot different from what I had expected of it (and indeed what I expect from any Stephen King novel) but this was not at all a negative thing. On the contrary, to have less horror and more thriller aspects to his work was a refreshing change from what I had grown to expect, and I found myself continually being sucked into this book, and resenting having to set it down at the end of the work lunch hour.

Without wanting to give anything away (like the back of my copy did, damn publishers!) the story essentially revolves around a man who has psychic powers that manifest themselves when he touches people, allowing him to see into the future and to warn people about bad things that are going to happen. This alone sounds pretty paranormal and all freaky and stuff, but really, this is sort of a minor plot point. Bear with me, because I know that sounds ridiculous, but really it's more of a story about the invasiveness of the media (something that is much more relevant now, I think, then it would have been in the late 70s), and about political power, and what some people will do (anything) to get it.

The invasiveness of the media part comes in when our psychic hero (I don't really want to tell you his name, although I'm sure you'll guess right away if you read it) is completely hounded by the press, chased down even to his fathers home, and first celebrated and then humiliated for his gift/curse (however you choose to see it). It's an interesting phenomenon that we see practically every week, how the press builds someone up just to knock them down again, and we can see through the firsthand experience of the main character just how damaging it can be.

Intertwined with the story of our protagonist, there is, as ever, an antagonist, who is generally rather unpleasant, threatens teenagers, businessmen etc; whilst also gaining in political power (which will probably not surprise you at all). If I was going to criticise the story, these bits would be it- they are very separated from the main thread of the story and, although they are needed for the (very dramatic!) conclusion of the story, I can't help but think there might have been a better way to include them that might have been a bit more polished and more integral to the main story. Quite frankly, our psychic friend could basically have just seen inside him and into his evil, and that would have been enough justification for the ending that we get.

What is interesting about our villain though, is that he lacks any kind of supernatural qualities, something which I have essentially come to expect from Stephen King. He is just, essentially, a very unpleasant man, who should not be allowed any kind of power in any way. The supernatural element, then, comes from the hero, and in what is possibly a unique situation, the supernatural is used only for good purposes in The Dead Zone, and not at all for bad, as in basically all his other novels (that I've read so far, anyway). This is an interesting kind of twist on what people tend to think about the supernatural, and makes it, in this instance, something to be harnessed for good, and not just for evil purposes. This is something that has been explored before by King, notably in Danny's psychic abilities in The Shining, but it hasn't before been the only supernatural thing about a Stephen King story, and that's what makes it especially interesting to me.

In spite of this though, I did really enjoy The Dead Zone, and want to thank it for not scaring the crap out of me, and for actually making me think about stuff. There's quite a lot more to it than I've actually talked about, and I have been deliberately obscure because I really don't want to ruin any of it for you! Just trust me that you'll like it, and add it to your wish list immediately if not sooner!
Posted by Laura at 11:05