This post is inspired by a post on Hello Giggles (the sort of awesome blog founded by Zooey Deschanel and friends that you should really check out if you haven't already so you can constantly go 'I WISH THEY WERE MY FRIENDS!') entitled '10 reasons I wish Don Draper was my boyfriend', kindly tweeted at me by Frances, and while I do love and hate Don Draper in equal measures (SO hot, but SO an asshole), I think I know someone on TV that would make a much better boyfriend. 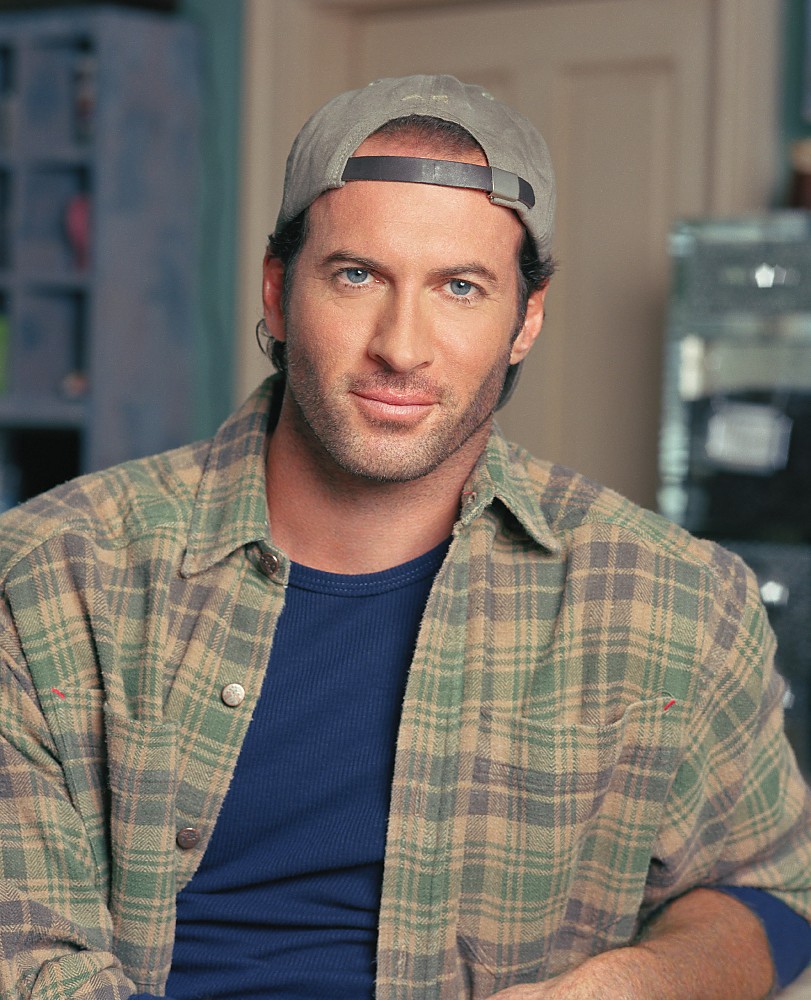 Behold, Luke Danes from Gilmore Girls. Not necessarily the most physically attractive specimen to grace the streets of Stars Hollow (that would be his nephew, Jess) but he's still pretty darn hot, and, most importantly, he's perhaps the TV character that I'm most compatible with in the entire history of television. Let's examine the evidence:

1. He owns a Diner- I can't even tell you how much I love American-style diners (if I find out about one, then I automatically have to go there) but Luke's is the real deal- and really, who doesn't love a man who can cook. I can also envisage the two of us working side by side in the diner and just generally being the awesome couple everyone looks up to and wants to emulate. Yeah, I dream big.

2. He's a man of few words- It's interesting that I find this an attractive trait in Luke, considering that I tend to gravitate more towards people who talk a lot in real life because I am pretty quiet myself. Nonetheless, I find Luke's non-verboseness extremely attractive, and I feel like he's the kind of person I could share long silences with without feeling awkward. Also, I would know that his introvertedness would just be a sign of how lovingly he was thinking about me...

3. He's so grumpy!- I know this isn't normally considered a good thing, but a grumpy little snarl from Luke can keep me amused all day! Because I know he doesn't mean it, and because he gets annoyed by things that would definitely also annoy me, this can only be a sign that we are meant to be together.

4. He's a really good dad- So, this girl shows up at Luke's, takes some of his DNA, and tells him that he might be her father. Instead of ignoring this, or just letting her go, Luke goes to her science fair to find out the results of the DNA test (I'm pretty sure none of the other prospective fathers does this), and when he finds out he is her father, does everything he possibly can to try and be there for his daughter (this includes going on a school trip with a load of science nerds- he's seriously a really good father!) These traits can also be seen when he's dealing with Jess, his wholly undisciplined nephew who comes to live with him, and to a lesser extent with Rory Gilmore too. He's exactly the kind of dude you'd want to mix DNA with (sexy!).

5. He harbours love for you for a really long time- So, on Luke's first date with Lorelai, he shows her this horoscope that she gave him the first time they met, because she told him it would bring him luck and because he was in love with her all that time. If that isn't the sweetest thing you've ever heard then you have no soul, and as long as you don't dwell on all that wasted time, then I think our lives together would be the happiest EVER. Obvs.

6. He's really romantic and just lovely as a boyfriend- So, I haven't seen this episode, but according to Frances, my Gilmore Girls guru, there is one where he makes Lorelai an ice rink because he loves her and she loves snow (there are probably other reasons for this happening too, but like I say, I haven't seen it so I only have the barest details!) From what I have seen anyway, he just seems to be the perfect boyfriend- never too needy or clingy, but still wanting to spend time with Lorelai and just generally let her know that she is loved. And he even puts up with her crazy...

7. He'll elope with you, after he's thought about it for a little bit- So, Lorelai wanted to elope with Luke after she doubted his love for her after he'd discovered he had a daughter and freaked out a bit. He wasn't completely sold on the idea (delivered as an ultimatum, not very cool Lorelai!) but after he'd thought about it for like a night, he decided he was ready. I love this- he's sensible but not too sensible, and impulsive after thinking it through a little bit- what can be wrong with that?!

8. He doesn't take no crap from nobody- This kind of ties in with his grumpiness, but it's more that Luke always stands up for himself (against Taylor and his continual barrage of crazy) and also has the ability to calm Lorelai down when she's being a bit of a fast-talking loon (which is most of the time. But when she needs calming down as well, he's the man for the job!) It makes him a sort of steady influence, pretty much a rock in everyone's lives, which I think is the kind of person you always need around.

I thought I'd be able to think of a lot more reasons than this for my wild, unbound love of Luke, but I really can't. I put this down, not to not loving him enough, but to the fact that what I love about him is his inherent Luke-ness- something which can't necessarily be described in words, but is evident just from watching him wandering around being Luke, and being amazing just as himself. And I think that that, is what true love is guys. Too bad he's a fictional character, and, more importantly as a barrier to our love, lives in Connecticut (I always think of Connecticut as being a really really boring place, kind of the US equivalent of Surrey, where I live. But if anyone wants to put me straight on that point, please feel free to!) But still, Luke- How I love thee!
Posted by Laura at 12:02