The Moonstone, Part One: "I had stood there listening to them, all in a tremble; not knowing whom to suspect or what to think next." 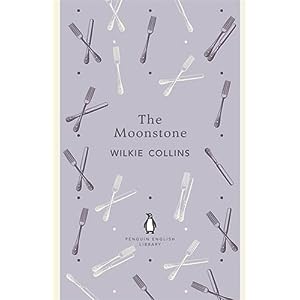 You and me both, Betteredge, you and me both. Seriously, though, how great is this book?! In a typical fashion, I was super-excited about reading it for the entire week (or, probably, for longer than that actually) and then... Forgot to actually read it. So i just finished it this morning, and my thoughts aren't really gathered in any coherent way, so excuse me if I just do the word equivalent of flapping my arms around excitedly.

SO! So many suspicions I have, that even at this early point I think I've accused everyone in the entire book of stealing the moonstone (except Sergeant Cuff, who, by the way is awesome. Seriously awesome) EVEN Betteredge who, you know, says he slept through the whole night, but he would say that, wouldn't he? I mean, obviously Rosanna is waaay more likely to have done it, but that's the entire problem with that theory- like we're going to know about it this early on! And then, obviously, Rachel seems very very veeeery suspicious, but I believe that she smeared the paint, but did so on a... nocturnal journey to one of her cousins (her cousins. Ew.) SO basically I have no idea with that, so let's just leave it alone for now. I say this:

(Seriously, I have so many Skarsgard gifs. So this is clearly going to be enjoyable for everyone!)

OK! So even though I suspect everyone, I also kiiind of love everyone too! Penelope is a ridiculous gossip, Franklin seems to know what he's all about, and the French/German/Italian/English thing? Amazing. Clearly he's also completely dreamy because Rosanna and Rachel both want a piece of that action, even though Betteredge reckon's Godfrey's a better choice (for Rachel anyway). I'm sorry, but Godfrey is dreadfully dreary (possibly unfair to say, since he hasn't really had as much narrative time as Franklin, but still) and, you know, doesn't even have a beard! Does anyone else think that Franklin's beard maaaybe bodes ill for his character though, since beards are usually super untrustworthy, albeit sexy? THIS CONCERNS ME!

Since we are all, obviously, looking for the next Marian, I kind of want to tentatively suggest Rachel, except that she got super moody and door slammy once her precious diamond went missing (toootally suspicious), but then also there's this:


"She was unlike most girls her age, in this- that she had ideas of her own, and was stiff necked enough to set the fashions themselves at defiance, if the fashions didn't suit her views."

You know? So I think we need more Rachel, to figure out if she really is fab, or if, in fact, she sold the diamond to fund a super super illegal abortion of Franklin's baby... (I don't know why this has become a soap all of a sudden, but hey, let's go with it!)

There are clearly so many awesome things I'm forgetting because I didn't leave myself enough time to process things, so I'm going to have to bullet point my way to the end- here goes:

So, that's all I have for you! Basically I love everyone, and will do until they prove themselves to be unworthy, or horribly boring. According also to my author profile, Opium plays a prominent part in The Moonstone, so I'm thinking either the police dude is going to use it to figure things out (a la that guy Johnny Depp played in From Hell) OR maybe Rachel has a nasty heroin habit and that's why she had to sell the diamond... These teens and their drugs...