Haven't you all missed this feature so much? Who forgot that I even did two of them once upon a time? *slowly raises own hand* Actually, I more periodically forget, as in I sometimes get an idea for one, and then can only think of three things and so another month passes without doing one. Why am I even explaining this? Who can say.

Anyway. I do have an idea this time, and it's, ok, you know when you're watching TV and there's nothing really on, and you come across something that you know you shouldn't really be watching because it won't improve your life much and yet you can't quite turn over because, hello compelling TV? That's what these are. I think it goes without saying that basically all of these are in the category of reality TV. So let's think of a title...

Top 5 Shows You Know You Shouldn't Watch, But Can't Quite Turn Off

1. The Hills- I am physically incapable of not watching The Hills if I know it's on, and there's no one there to stop me. It's my dirtiest little secret, because it's so bad, but OMG compelling! And the drama! And the WHAT THE HELL IS WRONG WITH YOU PEOPLE?! All you need to know about me and The Hills is that I cried when Lauren showed up at Heidi's wedding, so... Yeah. I have a problem.
Note: This is not applicable to the seasons without Lauren Conrad. Which really really suck.


2. Supersize vs Superskinny- This is a UK TV show where a morbidly obese person and a really underweight person swap diets, and it's actually not too trashy (at least, I don't think so) but it's not the kind of thing that a normal person would need to watch more than once. Since I like food, and have a penchant for documentaries about the morbidly obese (half ton dad, that kind of thing- it keeps me in line, weight wise!) I will literally watch this whenever I know it's on. Which is pretty often.

3. Wife Swap USA- I can take or leave the UK Wife Swap, but I can't get enough of the US version because, well, Americans are much crazier! Also it's more invented drama-y, which may be bad documentary wise but sure is good for entertainment! I could literally watch this all day, and I do believe I watched about 3 in a row once... That was a good day. 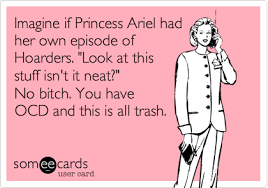 4. Hoarders- This one kind of goes without saying, I guess, but once I've started watching Hoarders, I of course can't stop. I guess I'm lucky that I can hardly ever find it on TV, because otherwise I'd just watch it all the time, like I did that time when I found it on the internet. That was an awesome week...

5. LA Ink- I don't think this is that bad either, but once it's on, there's no taking me away from LA Ink. It may have a slightly repetitive format, but tattoos! And Kat Von D! What's not to like?!

There are quite a lot more programmes that I basically can't turn off once they're on (and I have to watch any Back to the Future film any time it's on TV. Because come on, those are the greatest films ever!) but these are probably the worst of them. And Wife Swap is about as baaad as it gets. Now make me feel better: what programmes do you have to watch once they're on? Plastic surgery makeover ones (actually, I love/hate those too)? Soap operas? Tell me, tell me, tell me!
Posted by Laura at 08:21