The Little Stranger: A Thing. 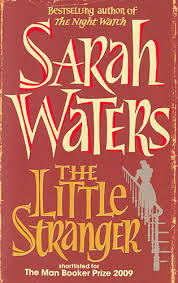 So I've been reading The Little Stranger as part of a readalong, and since it's all new and scary people I don't know if I'm meant to write a post about the first half or just discuss it on the host blog and it's all VERY CONFUSING AND SCARY.

Ahem. So what I decided to do instead, so that EVERYONE can enjoy my post, is just talk about a thing that the book raised, and that has been brought to my attention before, and we can all say what we think about it. Hence, no spoilers, everyone's happy. OK? Good. (Although, let me just say that this is the SLOWEST book ever and nothing has happened in 8 chapters. 8 BIG chapters, I should add. Sigh.)

So, there's this part where this girl goes to this party with this guy (details aren't important here) and when she's there she sees a girl she's friends with and they go off and dance and generally have a good old girly time. The guy sees this, and assumes they're really good friends, but while they're driving home, they have this exchange:


"'That girl Brenda I met tonight: I don't much like her, you know.'
I said, 'You don't? I'd never have guessed. You greeted each other like long-lost sisters.'
'Oh, women always go on like that.'
'Yes, I've often thought it must be exhausting to be a woman.'
'It is if you do it properly. Which is why I so seldom do.'"

Obviously all this is to show that this particular character is all non-conventional, blah blah blah, but is this really how women are? I mean, do you have friends that you don't really like? This isn't the first time I've come across the idea, is why it struck me as interesting/irritating (more of the latter). In Julie and Julia, Julie asks her 'proper' friend 'What do you think it means if you don't like your friends' and her friend (also a woman) says 'oh, it's totally normal'. Is it?! And the entire basis of Mean Girls is that friendship is a competitive enterprise, and, you know, everyone secretly hates each other.

And I really don't know how accurate these are as descriptions of certain female friendships, but I DO know that a lot of the females I know (not naming any names) bitch about their so-called friends a LOT, while I'm just sitting there going 'so... why do you hang out with them again?' See, the thing is, I don't have that many friends, but I can say with complete honesty that I don't bitch about the ones I have, because I love them! And honestly, I only want to hang out with people that I love, otherwise I'd rather be alone (you know, reading and shit) than spending time with people that I'm just going to spend more of my time complaining about afterwards. That's just how I roll.

So. Does this make me a 'non-proper woman', or just a sensible and thinking human being? I mean, am I the only person who just DOESN'T get this way of thinking, or are you with me? Friends are there to be liked, right, not to compete with or be irritated by or for you to essentially hate. Or, does everyone do this and I'm just the odd one out (which, in this case, I really don't mind)? Let's have your thoughts!
Posted by Laura at 09:25