Devouring Books: The Haunting of Hill House by Shirley Jackson 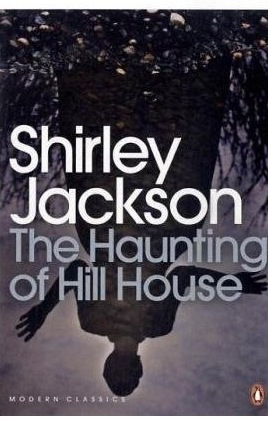 I read The Haunting of Hill House right in the middle of the Readathon, which is never a good time slot because I tend to remember the book I started with, and the book I finished with, and the rest are kind of blurred around the edges. I enjoyed (and was scared by) The Haunting of Hill House SO much that I'm hoping I'm going to retain it for a while, but in case I don't, I'm reviewing it first! It's the sensible way to go, I think.

Before I read it, I didn't really have high hopes which is weird because 1) I thought The Lottery, the only other thing I've read by Jackson, was excellent; and 2) Stephen King raved about it in Danse Macabre, and, you know, I trust his horror-knowledge! But still for some reason I thought I wouldn't like it, maybe because I was expecting it just to be a fairly straightforward ghost story, which would have been fine, but wouldn't exactly blow me away. I should know by now never to listen to myself, because it was AMAZING.

The premise of the story is that there's this house that this doctor believes is haunted, and in order to test out this theory, he wants to get some psychic-y people together to see if they can 'feel' anything about the house. So far, so typical; only one of the people he recruits, Eleanor, is something of an oddity. She's been kind of cut off from society basically her whole adult life, looking after her sick mother, and as a result:


"Without ever wanting to become reserved and shy, she has spent so long alone, with no one to love, that it was difficult for her to talk, even casually, to another person without self-consciousness and an awkward inability to find words."

So, because of her sad sheltered life, Eleanor sees this whole thing as an adventure rather than as a terrifying terrifying nightmare, and that's really where all her troubles begin.

The characters in this are awesome. Eleanor plays perfectly off Theodora, a very talkative friendly girl who's maybe a bit in love with Eleanor, and Eleanor's maybe a bit in love with her but then there's also this young attractive male (Luke) who Eleanor maybe fancies too, because she doesn't really know enough about herself to have made a decision about this kind of thing. And then their leader is Dr Montague, who endeared himself pretty early on to me by saying that he'd brought Pamela by Samuel Richardson to the house to send himself to sleep. Cause, you know, I HATE that book. But anyway, it's basically these four people and how they interact, and how they react to certain happenings that is really at the core of the book, and so it's really important for them to be as awesome as they are.

I don't really know how much more I can say before we step over into spoiler territory, but here's what I will say- this book is scary, and it's complex, and you'd think that maybe because it's complex that'd reduce some of the scariness because you have to think about it, but it really doesn't! In fact, it's kind of the opposite- because it's complex, you can't be sure what to be scared of, so in the end, you're kind of scared of everything. Well, two things. Maybe. And then, interspersed with this there are instances of humour (there's the servant who says the same things all the time and seems like a robot, and the Doctor's wife turns up at one point and, while she reckons she can talk to the dead, doesn't seem to be able to talk to the living at all) which truly are funny, and also help to make you realise how scared you were in contrast.

I'm not sure that I've really captured how excellent this book really was, but if I say that it's my favourite of all my RIP reads so far (of which there have been 7 or 8) would that help? What about... This is probably my favourite horror-y novel apart from some Stephen King ones? Yeah, let's say that.
Posted by Laura at 17:19