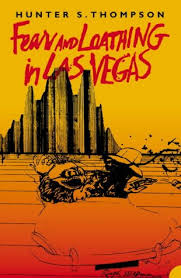 "Every now and then, when your life gets complicated and the weasels start closing in, the only cure is to load upon heinous chemicals and then drive like a bastard from Hollywood to Las Vegas... With the music at full volume and at least a pint of ether."

Every now and then, when you start a new job and don't really know what you're doing with your life, the only cure is to stay completely sober and then read like a bastard through Fear and Loathing in Las Vegas. Or, at least, that's what I did, and I'm not sure I'd recommend it as a soothing read when you're in a new situation, but it definitely kept me entertained through a few lunchbreaks, and made me giggle in public, so... It's pretty great.

I may have said before, on the evidence of reading a really little bit of The Rum Diary that I wasn't sure that Hunter S Thompson was my bag, but now that I've read this... I kind of want to retract that comment. Because his writing is not only funny, it's also interspersed with moments of righteous anger (not in an annoying way), disturbing yet hilarious drug fuelled paranoia, and, even though there's no overriding narrative, everything still ties together in a sometimes-coherant way that just seems to work. At least for me.

Frankly, this book would still be good if it was just one drug fuelled anecdote after another, and the great majority of it is that, and frankly I might have learnt more about the effect of ALL THE DRUGS from it than from any other source, ever. But what made it even better, for me, were those moments where, in the calm in the middle of the grasp of some drug or another, he gets a little serious, and takes things to another level. Like this:


"No doubt they all Got What Was Coming To Them. All those pathetically eager acid freaks who thought they could buy Peace and Understanding for three bucks a hit. But their loss and failure is ours, too. What Leary took down with him was the central illusion of a whole life-style that he helped to create... a generation of permanent cripples, failed seekers, who never understood the essential old-mystic fallacy of the Acid Culture: the desperate assumption that somebody- or at least some force- is tending that Light at the end of the tunnel."

Where, in spite of all his cynicism and paranoia, it feels like he really cares about somethings, at least some of the time. Until the next hit kicks in, anyway.

Possibly my favourite thing in the book though, and trust me, it's really a very little thing, was the part where Thompson talks about Las Vegas and it's kind of awfulness. I feel like there's this whole 'thing' about 'Vegas' at the moment, where people think it's the absolute ultimate place to go and PARTY and frankly, the entire idea of it makes me a little bit ill. Until now, I kind of thought I was alone in this thought, (cause who doesn't like PARTYING for days on end and never seeing sunlight? Only weirdos, right?) but Thompson speaks to me from all the way back in the seventies, and makes me think that I'm ok:


"A little bit of this town goes a very long way. After five days in Vegas you feel like you've been here for five years. Some people say they like it- but then some people like Nixon, too."

I know I've been kind of brief here, but this is my way when I really really like a book. It's funny, it has its moments of depth, and it's really really difficult to put down once you start reading. Who knows why I put off reading it for so long, but let me advise you now- don't make the same mistakes that I did! (If you've been putting off reading it and all. If not then, you know, don't worry so much about it. But still read it.)
Posted by Laura at 12:07