"Thick plots are my specialty. If you want a thinner kind, look elsewhere." 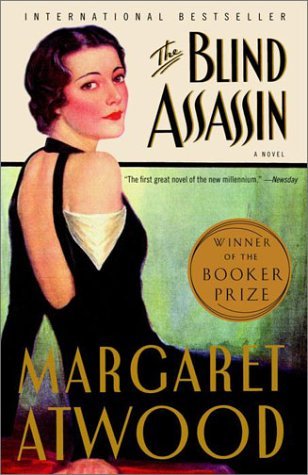 So there's this Advent with Atwood thing happening in the world of the blogs, and although I'm not really in the market for a lot of Atwood this December (I've got TWO challenge books left, and that's too close NOT to win) I am taking part in the readalong of The Blind Assassin readalong that's happening because I thought, if not now then when? Exactly.

I actually started reading this sometime last year, read the first mini-chapter, shrugged, and then took it back to the library when I'd had it so long that I had bought my own copy. This was a mistake (the not-reading it, not buying my own copy) for I've now read the first quarter and ohmygosh it's pretty awesome!

Yes. Yes I do. Wait, what were we talking about?

Already in this first section I'm completely glued to the book, and frankly, it would have to be good for me to want to read it when I feel as crappy as I do right now (that's pretty damn crappy, folks). And it's weird because, if someone tried to explain it to me I'd probably be like, 'that sounds weird' and move on, but actually, I'm very much into it, so far.

Let me explain it to you, so you can go 'that sounds weird' and move on. So the book begins with the death of Laura, the sister of the narrator of some parts of the book, and also, since quite a bit of the book (I assume) is told in the past, she's shaping up to be a main character, so even though we start with her death, I'm guessing we're going to learn everything that's important about her retroactively.

Or, maybe, we're supposed to learn things about her through the book she's left behind (called, funnily enough, The Blind Assassin). Because, in this first chunk of book, there are 'extracts' from the novel that 'Laura' wrote, and it's so very interesting because, instead of taking these bits of story for what they actually are (a whole story) I find myself reading them to find more clues about what Laura was like, and who she was which, I assume, is the whole point.

Basically, so far, The Blind Assassin is hitting all my buttons- there's a mysterious and yet clearly awesome character called Laura, there are meditations of what it's like to be old that, genuinely, I can't get enough of, and there are layers of story like you wouldn't believe, mixed in with newspaper articles and old lady diary entries and kind of everything you could want from a book. And, you know, stuff like this:

"Farewells can be shattering, but returns are surely worse. Solid flesh can never live up to the bright shadow cast by its absence. Time and distance blur the edges ; then suddenly the beloved has arrived and it's noon with its merciless light, and every spot and pore and wrinkle and bristle stands clear." It feels like it's definitely too early to say 'Atwood, you've done it again', but that's really how I feel about the first bit of this book. I sort of kind of can't wait to read the rest. But I shall, for that is the readalong way.
Posted by Laura at 08:35