Bout of Book-ers! (And, everyone else). Hello! I am still alive, despite the fact that I haven't readalongly updated for over 30 hours (shut up, I know you missed me)- I meant to update last night before Mad Men but I watched it an hour earlier than I'd anticipated and then I just crawled into bed. And slept FOREVER, and was still tired when I woke up. Sigh.

Anyway. It's today now! (Technically, it's this evening now) and I don't have much to report on the reading front, but that's only because I spent my morning book shopping, which I think we can all agree is a legitimate activity. And because it has to do with books, that makes it a legitimate readalong activity too, right? So let's talk about what I bought! 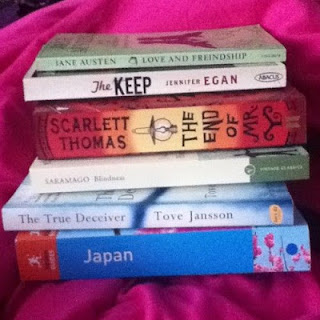 So! I got a Rough Guide to Japan because I'm optimistic and also Oxfam were doing a buy one, get one free promotion on books, annnnd that was my free book.
Above that, is The True Deceiver by Tove Jansson who, you probably don't know, is the lady behind The Moomins, but she's also written a load of adult books that I have not at all read but you know, I want to start!
My other Oxfam book was Blindness by Jose Saramago, which I want to say... Megs? read probably ages ago, and I pretty much forgot about it until I saw it today and I was like yes, yes I will buy you. So yeah.
The other three I also got as a '3 for £5' dealie. Of these, The End of Mr Y by Scarlett Thomas was the most wildcard-ish, and I nearly bought The Post-Birthday World by Lionel Shriver until I saw this and remembered that Bex and Hanna both LOVE Thomas, so I was like, yeah, ok.
And THEN I still nearly bought the Shriver book, but I saw The Keep by Jennifer Egan, and... I genuinely like Egan, as opposed to vaguely disliking Shriver, and the back involved A CASTLE and also ADDICTION TO A WIFI CONNECTION, and so I obviously had to have it instead.
AND (I know) finally I got Love and Friendship by Jane Austen, which, as I understand it, is a collection of her really early writing and juvenilia and I kind of didn't know it existed, so obviously I needed it. Oh yes.

And that was my morning, in book form! I did read maybe 20 pages of Kitchen with my lunch (haha!) but that's kind of it for today, so far (and I have to write about Harry Potter later tonight, so... there goes the rest of my evening!) but, you know, oh well! I'll make up for it this weekend. Perhaps.

Pages Read: 469
Books Read From: 4
Books Finished: 1 (still just the one!)
Snacks: Yeah, I'm still not really doing that. *shrugs*
Blogs Visited: Remember that sleeping thing? That was what I was doing. But I'm still at least trying to keep up with my book ladies!
Posted by Laura at 20:34