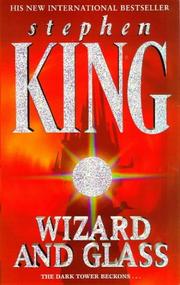 I love The Dark Tower books almost more than any other series I've ever read (*looks lovingly at Harry Potter books*) but I really hate Wizard and Glass. And I don't even hate it in a 'I-don't-like-this-book-but-it's-still-Stephen-King-so-it's-fine' way- I hate it in an actual hating it way. There are quite a few reasons for this, and since it's difficult to review Dark Tower books without giving things away about all the rest of the books, I'll just list the reasons why. Sounds good (and sanity retaining) right?

I just... Yeah, it's annoying. But a few points- the story is very much not-my-thing, so I was never going to like it THAT much anyway, I definitely don't remember being as pissed off by it when I was reading all 7 books in a row (apparently I have definitely spent too much time away from The Dark Tower!) and I don't know but there might be things that are important in it. I think what I'm saying is, don't be put off by The Dark Tower because this book sucks, because it might not suck for you! It might be exactly your thing. But I definitely feel like I'm just going to be reading the first and last few pages of it from now on, and if you were going to skip a book in the series? This would be the one to skip.
Posted by Laura at 08:00