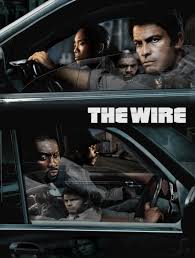 I finished watching The Wire an entire two months ago, and I'm concerned that if I don't write something about it now, then I never will, and this post will be lost forever in my drafts folder (or, you know, I'd delete it because I got bored looking at it). Here's the thing- I don't want to say too much about The Wire because I feel like it's been subject to SO much praise (so so so much. Incredible amounts. Probably even more than it deserves, and it deserves a fair bit) that anything I'm going to say about it is going to be redundant and, you know, you're probably sick of hearing about The FUCKING Wire already (I know I was before I watched it. But then the Breaking Bad withdrawals set in and I had to do SOMETHING with my time.)

So. The Wire, along with The Sopranos, Mad Men, and Breaking Bad, is commonly regarded as in the top four TV shows OF ALL TIME. I'd prefer to think of it as the top 4 TV dramas of all time, and if I'm honest, The Wire wouldn't be in my top 4 (replace it with The West Wing and I think you're pretty much there, though) BUT that doesn't mean that it isn't still FREAKING AWESOME, it just means that I'm not so much into the police dramas. I mean, the fact that I even watched the whole five seasons of this is an achievement in itself, because I think the only other TV police show I've ever watched so much of is 21 Jump Street, for... Obvious reasons.

I almost feel bad watching it because he hates that show SO FUCKING MUCH. But he's too beautiful not to.

Anyway. In case you were wondering, The Wire is MUCH better than 21 Jump Street, albeit not as beautiful. But then again...

Oh, McNulty. You're such an asshole. But I love you.
And, for that matter,

Stringer Bell, guys. ALSO an asshole. I don't know what this says about me.

See the thing is though, BOTH of these guys are assholes, but they're on different sides of the law, and I think that's what REALLY makes this programme interesting- the characters are so layered and interesting, and no one's wholly good or wholly bad, and THEN you also see the the different cultures and environments they've been brought up in, and maybe you go 'well, in different circumstances, maybe McNulty could have been a great drug kingpin, and maybe Stringer could have been a cop if, say, his best friend had been murdered instead of growing up with him and them dreaming together about how rich they were going to be.' There are really a very very few characters who've escaped the circumstances they grew up in, and that alone is enough to make you think about a LOT of things.

Basically 90% of the characters are unlikeable, or at least unlikeable some of the time, and you'd think that would make it kind of frustrating to watch, but really I was more frustrated at the lack of women in it (oh yeah. There are like no women. Don't come into this expecting women, because there are maybe two? And those that get to be any kind of main character have to have rejected femininity entirely. But hey, there're always strippers! *sigh* and THIS would be why it doesn't make it into my top four, just by the by). Because the thing is, these characters being unlikeable doesn't mean that you don't care about what happens to them- it just means that you love them, but you don't always like them. Just like a completely fucked up little family of badness!

Anyway. One character I quite uncomplicatedly like is Omar. Omar is essentially a thief who only robs drug dealers, and a murderer who only murders drug dealers (and only when he has to). He's on the edges of the drug dealing culture because it seems to be where he can make the biggest profit, but also because he's bound to be on the edges of that whole culture because he's also gay. Which is just sort of AMAZING to see because I'm not sure I've ever seen a gay character ANYWHERE who's completely comfortable and unapologetic about his sexuality, but also whose sexuality is also not the most important thing about his character- rather, the fact that he's a complete and utter total badass is.

And it's so weird to be rooting for a character who basically just steals and kills, but somehow The Wire is the kind of programme where you end up doing just that- there's the sense in which he's almost doing a public service by beating these violent, damaging men at their own game, and it feels ok to support him in this because, as he constantly reinforces- 'I never killed nobody who wasn't in the game'. Omar does everything he can, in fact, to avoid harm to civilians, and you kind of have to love him for it. And just to reinforce what a badass he is- the danger involved in what he does is apparent throughout the series, but no more so than when he ends up in prison for a murder that he actually didn't commit and it suddenly becomes clear that he's locked up, unarmed, with the exact people he's been fucking with for years, and you suddenly realise that this is the risk he's been running all along and GOD, can you imagine constantly fucking with a load of violent criminals and then suddenly being easily within their grasp? How long before you get killed in that situation, twenty minutes? Omar is a BAMF.

And now, a really quick rundown of each season, and then we're done, I swear.

Season One: It really sets the bar high for how the rest of the show should be- the ensemble cast of police officers is so good that it feels wrong somehow when they're all working separately (and, in fact, I'm not sure the whole team is ever assembled again after this season). The storylines are tight, the targets are made clear and all the characters and themes and issues and everything are introduced so well and strongly. Just an amazing first season.

Season Two: I just find this season really really brave, because rather than just giving us what we've been used to (the same characters, the same crimes), things are actually switched up and the targets are actually completely different- this is still Baltimore so the crimes still involve drugs, but in a completely different way to season one (although you still get to see some of the criminals from then too, because, you know, attached.) Also has maybe the most chilling line of dialogue I've ever heard in anything: "Cut off his hands. Cut off his face."

Season Three: This is really the Stringer Bell-Jimmy McNulty showdown season, although this really constitutes Stringer going about his daily life and McNulty becoming increasingly obsessed with him. If we're applying the Draco-Harry rule here, then Jimmy is DEFINITELY in love with Stringer, but... I'm not sure that's true. Sadly. LOOK HOW CUTE THEY ARE!
Anyway... This season I found a liiittle bit patchy and unfocused at times (look at this guy! And now this guy! And that other guy is doing other things now for reasons I'm not sure of!) but it definitely sets certain things up for the rest of the series.

Season Four: The season of the children! This is probably my favourite season, because there are kids, which means that it's here that you can see where people start off in the streets and why they become drug dealers at all. It's probably the most social justice-y of the series, but it's interesting seeing how these characters we thought we knew suddenly start acting differently when children are involved (as they are in practically all their lives), and it's heartening, too. Until the end. Which is SO SAD.

Season Five: It's... Patchy at best. There's a newspaper involved, which is ostensibly to show the inequality of media coverage over things like gang shootings, but is really there so McNulty can do something SO STUPID that I can't even think about it without getting pissed off. It's not at all without merit, and it really really finishes things off well, I think, but it's definitely not the best season. But, you know, it's The Wire and it's allllllll good.

And those descriptions? Really, really, really just tips of the iceburg because oh my GOD the characters I didn't even mention (BUBBLES!) and the whole entire storylines I missed out (this guy runs for mayor and I really don't give a shit because everything about the Political stuff was already done better by The West Wing) and really you just have to watch it because no one is ever going to be able to cover everything that happens in it in one blog post, but through a series of emails? I think we can get a lot closer! And I can't even imagine a time when I won't want to talk about The Wire. Seriously.
Posted by Laura at 08:00