RIP IX BOOK 2: We Have Always Lived in the Castle by Shirley Jackson 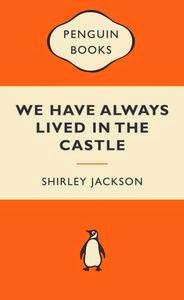 "When Jim Donell thought of something to say he said it as often and in as many ways as possible, perhaps because he had very few ideas and had to wring each one dry... I made a rule for myself: Never think anything more than once."


I wasn't overwhelmed with love for We Have Always Lived in the Castle. This surprised me, because I loved The Haunting of Hill House an unspeakable amount, but I guess this goes to show that you can't necessarily read by the author all the time and expect it to work. It's not a terrible book, I should probably start off by saying, and actually I think the main problem I had with it was one that I was supposed to have, but at the same time... It kind of bugged me!

SO. The deal with We Have Always Lived in the Castle is that Merricat lives with her sister Constance and her sick Uncle Julian in, well, not so much a castle as a really big house. The family used to be bigger but all but the three of them were killed when the sugar for their strawberries was replaced with arsenic, for which Constance was tried (and then acquitted) because she was the one who prepared the food. Because of this, the townspeople who live just down from the big house are both afraid of and ostracise the family, and so Merricat is the only one who leaves, twice a week to get the groceries. As things do, as the book goes on things get progressively worse, the townspeople get downright nasty, and everything feels horribly unsettled and uneasy.

There were things I liked about this book, and I don't want you to think I hated it because I didn't. I was totally intrigued by the way the townspeople didn't seem to like or care about the family to begin with, but as soon as the other family members were murdered, they took it almost personally and took it upon themselves to punish the surviving ones. It felt almost like they were just taking the chance to outwardly do what they had been talking about in their own houses for years and years, and it's this kind of bubbling over nastiness that makes me really like Shirley Jackson. (Is it time to read The Lottery again. It might be time. Go on, read it!)

BUT. I really hated Merricat. This was unfortunate, since Merricat is our narrator and the way we see this world, but I couldn't help it, I just hated her. I don't think that I was supposed to like her, exactly, but I don't think I was supposed to hate her with the passionate fury that I did. She's supposed to be 18 (I think) but acts like a child- ok, understandable because the majority of her family died when she was 12, so maybe she has arrested development issues (God, I love that show). But she's childish in a way that means she won't accept reality, and she's childish in a way that holds Constance back which is incredibly unfair to her (please keep in mind that Constance was acquitted. She's probably not a murderer, so we don't have to hate her. We can want good things for her.)

So, the fact that Merricat seems to be completely mentally disturbed meant that I just couldn't get on board with wanting good things for her. I wanted good things for Constance, and sweet Uncle Julian, but that seemed like it would have to involve Merricat so I didn't really even want that either. Now that I'm thinking about this, I guess I'm realising that I kind of cast Merricat as the villain of the piece, and I'm also realising that maybe that's what Jackson meant to do all along. Which is making me think that We Have Always Lived in the Castle is even cleverer than I realised, but not that I must automatically be in love with it, because at times I really had to grit my teeth and power through reading it because I HATE MERRICAT. It is not a long book, and it took longer than it should to read.

Basically, you will probably like this book better than I did, which is some but not ten billions. I don't even feel let down by Jackson, because I think she actually did exactly what she intended to do with it, but it just really wasn't for me, in the end. Not bad as an example of Shirley Jackson's themes and stuff, but definitely not my favourite of her books.
Posted by Laura at 08:30