Oh heyyyy, remember when I started this whole Masters thing and said I'd write some stuff about Shakespeare and then promptly didn't do that (or much of anything else on here, really)? Well... Here is some of that stuff.

Basically my course is in two parts- one unit (or, my Wednesdays) looks at two plays (King Lear this semester, and The Tempest the next) in depth, encompassing the critical debate about them (academic essays! Yay! *SARCASM FONT*) and looking at creative responses to them- for instance, for King Lear we're reading two other plays inspired by it, a novel based in the American midwest with its framework, and four movie adaptations of it. In a lot of ways, this is the course I prefer, because who DOESN'T want to look that in-depth into King Lear and The Tempest? No one, that's who.

The other unit though, which is still awesome (aka my Thursdays) simply looks at The Works, taking one play a week (except for December, where we have two weeks of The Sonnets, or pleasekillmenowthanks) looking at that as in depth as you can in a two hour seminar (plus independent study, of course) and reading some academic essays (again, YAY) about those too. This means that, yeah, I have to read one Shakespeare play a week, and yeah, I bloody love it.

However, all this reading along with working three days a week doesn't leave a lot of time for things like fun reading (although I did just finish Lena Dunham's book and LOVE IT), or watching tv without falling asleep, or writing about things on the internet, or anything that doesn't involve Shakespeare and work. Which, at least for now, I'm finding ok, because Shakespeare is kind of fun to me I KNOW WHAT A NERD.

Anyway. As of right now, I've read three plays for The Works unit (I'm already so deeply into King Lear that I might not be able to write anything about it ever that isn't a spewing of big stupid words and stuff. But I'm also not done with it yet, so maybe I'll write about it in December. We'll see.), so let's talk about those right now. I'm not going to be annoying and scholarly because, let's face it, I'm going to have to do that for real soon enough, this is really just for fun AND for the purposes of recording all the things I read here. Please don't take my irreverence for anything less than love because, come on. Shakespeare's like, totally hot. And some other stuff too.

The Comedy of Errors

The Comedy of Errors is, I believe, one of Shakespeare's less performed, and less read plays. There are good reasons for this: it kind of sucks. I want to say that it kind of sucks in a Shakespeare-y way, so you still learn some valuable life lessons and come out of it enriched but not in love (or some shit like that) but actually... It just kind of sucks.

Let's talk about it. The deal with The Comedy of Errors is that there are these twins and they were separated when very young because of a shipwreck (this happens more in Shakespeare than it's ever happened in life, I think) except I'm lying because each of the twins ALSO has a slave and their slaves are twins too. I mean, what are the odds?! The twins eventually end up in the same place (of course) everyone is mistaking everyone for everyone else (of course) and insanity ensues. It's all very very silly, and a lot of the comedy is, I think, supposed to rely on the masters beating their slaves, which... is not so cool.

I shan't tell you the end just in case you want to read it (WHY?) but if you'll consider that the tragedies end in death and the comedies end in marriage (or, just generally, happiness) then you've pretty much got it. I don't really have much to say about it, other than, thank god it's short, and, you know, they can't all be winners. To be fair, it's probably one of the easier plays I've read to date, so it also has that going for it. Unfortunately, the lack of difficulty kind of translates to the story too, and... Meh. Meh is what I'm going to conclude with. 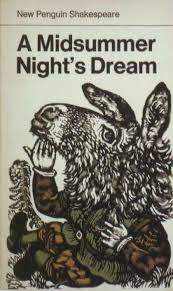 And from 'meh' to ZOMG AMAZING, we have A Midsummer Night's Dream. I heart A Midsummer Night's Dream, and until I re-read it again this time round, I kind of just assumed that I loved it because I was in a school production of it when I was about 9 and therefore it was 'my' play. (I was Hermia. I wanted to be Helena. Don't talk to me about it. [HELENA IS FUNNIER]). It totally is my play, but I actually love it, as it turns out, for some fairly solid scholarly reasons, and also reasons that are all about its awesomeness.

A Midsummer Night's Dream, for the uninitiated, intertwines three stories that all meet in an enchanted forest on a midsummer night (duh. Except not really duh because it's also May, and it's also sort of four nights, and also there might be a giant moon, or there might be no moon. It's pretty complex when you get into it, so I advise not doing that)- one involves a complicated love square, one involves a group of tradesmen who are trying, with mixed success, to be actors, and one involves fairies and mischief and shit. All of these intermingle and cause all kinds of mayhem that is, of course, all sorted out by the end so everyone can be happily married and laugh at the players who are making sex jokes because this is Shakespeare.

Of the three stories, my favourite involves the love square, but that might still be a hangover from being involved in exactly that storyline when I was 9- EXCEPT it isn't because I have big ideas about it that might just become my essay for this term SO THERE. Everything I've read about MND, though, seems to focus on class issues and marriage issues of other characters, with nary a mention of those guys, so this is probably an unpopular obsession, but I just want Helena and Hermia to get their men and be happy and probably have a lesbian affair on the side, ok? Actually, that's a thing about Shakespeare that no one really talks about- he actually has female friendships and sometimes they're more convincing than the romantic relationships. Does he pass the Bechdel Test? Usually, yeah.

Anyway, A Midsummer Night's Dream is amazing, and if you haven't read it yet then I just don't know what you're doing with your lives. Get on that.

The Merchant of Venice 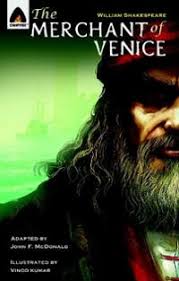 The Merchant of Venice comes under the category of comedy, but it's not so funny if you're Shylock, Jewish, or have a soul. I have issues with The Merchant of Venice and its depiction of Jews in a similar way that I LOATHE The Taming of the Shrew for its rampant misogyny EXCEPT I can't tell if there really is a smidgeon of sympathy from Shakespeare in some of Shylock's speeches, I just know that there isn't any in the way he ends up. (We all know about the pound of flesh thing, right? Cool).

However, I don't hate The Merchant of Venice. I haven't seminared on it yet, so don't hold me to THAT feeling, but there was a lot in it that wasn't flagrant anti-semitism, and that's the stuff I'm holding onto so I don't have to hate Shakespeare. The story is basically that there's this Merchant (amazing, right) Antonio, who's sad for no reason, but still he wants to help his buddy Bassanio marry this rich woman because he's broke but wants to live in the style of a rich dude. Why does Antonio want to help him so AND willingly agrees to give a pound of his flesh in exchange for a loan from Shylock?

He's totally gay for Bassanio. He is. This isn't just me finding gay dudes everywhere, it's a pretty well established thing. I swear.

So there's this whole forbidden love element, there's Shylock's daughter who wants to marry a Christian and I'm not entirely sure if it's because she loves him or because she wants to escape the persecution that she faces as a Jew every day (heartbreaking!) or because she wants to escape her controlling dad. The main thought I have about The Merchant of Venice though: No one is very nice. Antonio has abused Shylock for years, Shylock wants to CUT THE FLESH OFF A LIVING HUMAN, Bassanio wants to marry a rich woman he barely knows, Portia (said rich woman) lies a LOT and is kind of racist... There aren't a lot of good people here, and maybe that is the point. It's not anti-semitism, guys! It's just misandry!

Mind you, Wikipedia (the academic's friend) tells me that the Nazis broadcast a radio play of The Merchant of Venice just after Kristallnacht, and the idea of Shakespeare being used in that way makes me want to throw up, but the fact that it's kind of apt to be used in that way is not cool either. PROBLEMS, guys.

And that's pretty much where I'm up to in Shakespeare right now. Coming soon: Some histories! I'm not at all excited to read them.