Sunday Sundries: I Turned 26 and It Was Fine

Guys! That was a longer than anticipated absence, but whatever, I'm here, I'm supposed to be writing essays, so it's all going very well (life, that is). I am now older than my mum was when she got married, but, you know, she had to marry my dad so it's all swings and roundabouts, really!* So my birthday happened, that was cool, and I got A LOT of books that I'm going to share in a separate post that will definitely get written (*shakes head vehemently*) at some point, and since then I've pretty much either been working or procrastinating from writing/editing essays. I make some interesting life choices when I'm supposed to be writing essays, like watching excessive amounts of anime that I can't even have on in the background because it's in fucking Japanese, and spending a ridiculous amount of time on a mission to get to the post office which had shut 14 minutes earlier... FML was all I had to say on Thursday, to be honest.

Excellent things though: I went to Oxford to see Frances on Wednesday which was obviously excellent even though the Bodleian Library tricked us into believing they had a First Folio on display when in fact they did not, or if they did, we couldn't find it (they probably did. We were probably just terrible finders.) But more importantly, there were burgers and milkshakes so everything was amazing 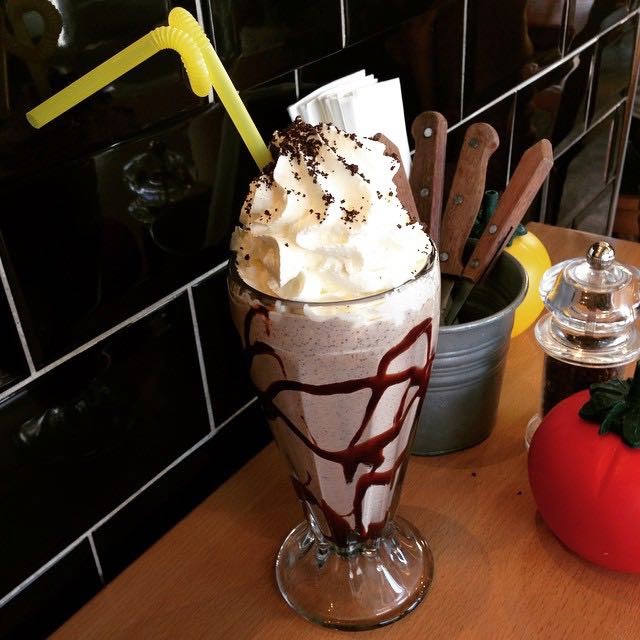 There are no words.
And did I mention that FRANCES was there? Cause she was and she's the best and we never run out of things to talk about and I love her. Plus she paid for my lunch so, you know, THE BEST!

And now. DRUMROLL PLEASE. I've written a 26 before 27 list! I didn't do one of these last year because I was generally too sad, but also because my brain was pretty much going 'I want to do a Masters. I want to do a Masters.' and I figured, hey, that's probably going to take up quite a lot of time, ya know? This year? I'm still doing that pesky Masters, so most of these aren't going to apply until after September, but at the same time... I'm not so good when things that have taken up a lot of my brain space end, and I think it'll be good to have the option of a LIST! of THINGS! That I can totally do! But I also totally don't have to. It's a completely non-pressurey thing, but here are a few things I'd quite like to do in the next year, perhaps.

1. Get a bloody Masters - Ok, I'm cheating because this one is pretty much a given. BUT I STILL HAVE TO DO IT.

3. Run 500 km - I wrote this list before developing this weird foot thing basically yesterday... My enthusiasm wanes somewhat when I'm having foot pain. But Imma try.

6. Go to London Zoo - You can come with me if you want! I've never been, and it's ridiculous.

8. Do proper London book shopping - I made Bex and Katie promise we could do this again when I had to leave them stupidly early to go to a Macbeth seminar. BOOKS.

9. Bake at least 26 things - Maybe blog about it. Who knows! Speaking of which

10. Blog at least twice a week - This is something that should be achievable even now, but somehow I still don't do it, and I've already failed at it since turning 26. But still, I shall try.

11. Go somewhere new - Who knows where? Except I do, it'll be somewhere in England. I have a 16-25 railcard that I need to take advantage of before October, so... Sometime before that, I'd imagine. I'm so good at planning shit.

12. Do a Parkrun - I keep running into (literally!) parkruns when I do my own, much less organised and shittier runs on a Saturday. I should probably actually do a parkrun instead of essentially hiding from them/getting up earlier than them to run...

13. Do two 5ks in 2 weeks! - This one's a bit non-negotiable... I have to do these now. They're for charity! It's all good! I'll be fine! (You can totally sponsor me here, or here, or even both if you're secretly a rich person)

14. Go to the British Library - Because come on, how have I not been here yet? Ridiculous.

15. Go to the Globe - Ditto the above. I mean, I've been PAST the Globe, but I haven't actually been in. Stupid.

17. Make a pop culture embroidery - You know, something like this. Or this. Something excellent, anyway.

18. Do morning yoga on work days - This is a thing I'm trying to do. Putting on a list will definitely make it habit, right?

19. Stop buying crap I don't need - I've gotten quite bad at buying little things just because I want them lately. This isn't really a problem, but when you've got more books than you can read in years, and more pyjamas than any human needs, PLUS no money, it's kind of a problem. BASICALLY I want to do a bit of a spending detox and

20. Save some damn money - Not a lot. But a little bit. I've got a system worked out, it should be good. You know, maybe.

21. Read 10 books before buying a new one - I'm serious about this one. I don't NEED any new books at all, I'm slightly scared of being a crazy woman who dies because she's been crushed by a bookcase and... yeah. This counts kindle books too! I'm seriously considering unsubscribing from Kindle daily deals emails because that shit is evil.

22. Watch all the Studio Ghibli Films on Tivo - You can basically just consider this one done. Film 4 had a Studio Ghibli season and I recorded all the films. This is important as a life goal because culture and shit, innit?

23. Go vegan for a month - I've said I'd do this before, and never have. We shall see if it happens this year.

24. Give up diet coke for a month - I'd really like to be a person who has an occasional coke rather than someone who has to have it daily before she really feels awake. Plus, that shit's expensive. Plus it's terrible for you. I actually genuinely want to do this except I also kind of don't? CONFLICTED.

25. Write more paper letters/notes - Who wants a paper letter from me?! Let's bring back handwriting, kids. I'm planning on starting this one soon cause I have something to send my friend so yeah! Writing!

Aaaaand for my final trick, I'm going to try not talking about myself for like 5 minutes. Maybe I'll even bring some book reviews back to the blog! Or... At least some anime reviews? Yeah, something like that. Two posts a week from now on, guys. Get excited.

*They both read this which I find REALLY ANNOYING, by the way, but hi guys! Only joking, dad! Kind of!
Posted by Laura at 09:00