Comic Books I Have Devoured in the Last Year, For Posterity

I feel like all I've done this year is read comics, but a close examination of my reading diary (awww yeah nerdy as hell) tells me that, Shakespeare offshoots and volumes of The Sandman (AND Watchmen, which I loved so much I actually managed to properly review!) aside , I've actually only read three. Which is way more than I would have read most other years, so there you go. I had this theory for my birthday that I should ask for a lot of comic books because 1) I never buy them for myself cause they're too expensive, and 2) Even though I had no time to read, I would have time to read comics because they take like an hour (well, some of them do). That didn't really happen because, I mean, dissertations take up a lot of time, you know? But that basically just means that I now have a load of comic books to read, and in no world is that a bad thing.

Here are some feels about the ones I have read: 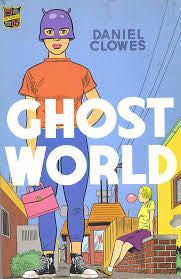 I have a weird relationship with the movie Ghost World because I'm never quite sure if I like it or not, and the same kind of went for the comic. I'm just realising as I write this that my main problem might be that I want Enid to basically be Daria, and... She is not Daria. Anyway. The comic book is quite different from the film in ways I can't entirely remember now, but I do remember thinking the comparison was interesting and I wanted to make some, so... That's very helpful (I'm so sorry, this is a fucking train wreck). ANYWAY. I think the thing I have mostly learnt about Ghost World is that I'm never quite going to relate to its characters, not only because I'm just not quite that mean, but also because I'm not a teenager anymore. If I had been, I'm sure it would have been very inspirational, but as it is... Not so much. Still, I always enjoy Ghost World in its various forms, so it's worth a read.

Lighter Than My Shadow by Katie Green 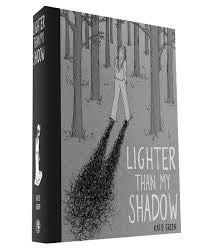 I genuinely have no recollection of first hearing about Lighter Than My Shadow, but I have always thought the title is excellent and it fulfils so many things I want from a book. This is a graphic novel memoir (FAVOURITE) about eating disorders (PSYCHOLOGY: FAVOURITE) and the drawings are everything that I want and it's just so bloody brilliant. At over 500 pages, I think it's the biggest comic I've ever read, and don't get me wrong, it's difficult to hold; but it's well worth the arm strain. Green is very insightful into her own experiences, and, I can only assume, very honest, and it all makes for a very interesting, and sometimes heartbreaking, read. 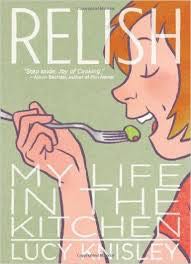 If I liked the other two comics here, then I loooooved Relish. I can't think of a single thing I didn't like about this book, and there is so much in it to love. Relish is another graphic novel memoir, but it's more of a retelling of important moments in Knisley's life centring around food. The drawings are perfect (for the kind of drawings that I want to see, anyway) and there are even recipes at the end of each chapter so you can actually try the food that Knisley is talking about, as if you couldn't practically taste it already from her descriptions. Writing about it is actually making me want to read it again quite badly, and I don't think it'll be long before I'm flicking through it again, and maybe even making some of the recipes, who knows! But seriously, if you like comics, and if you like food, then it's pretty important that you read this book.
Posted by Laura at 08:00

Email ThisBlogThis!Share to TwitterShare to FacebookShare to Pinterest
Labels: COMICS