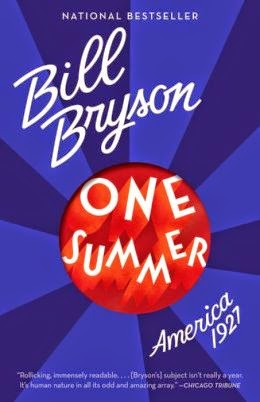 Of the books I read in February, the only one I really wanted to talk about was One Summer. Reading this book is a way bigger commitment than I had realised- I only had the kindle copy (I assume it was a daily deal at some point) and so starting it wasn't a problem until I realised the 'percentage read' counter crept up so. Slowly. What. Even. Is. This? Perusals through amazon revealed that I'd inadvertently agreed to read a 672 page book without realising it, so when it ended less than 80% of the way through (soooooo much bibliography, soooooo much index), whilst I could have read so much more, I was almost slightly relieved.

It's just... It's a whole lot of non-fiction and I wanted to move on with my life, yeah?

So. This book pretty much does what it says on the tin. It's basically a chronicle of the summer of 1927, a summer which, I'd like to say, is not one that we necessarily think of as historical (all the years between WWI and WWII are kind of murky to me) but in which a lot of stuff happened all the same. And my, the stuff that happened! I'm of the personal opinion that Bryson pretty much wanted to write a book about Charles Lindbergh/the race to fly from New York to Paris, AND wanted to write about the Yankees and their amazing season (since these are the two main events he returns to) and realised they happened at the same time so combined everything into one book.

And weirdly, it works. Working chronologically through the summer, Bryson finely details every event that gripped America, in a time before TV and at the very beginning of talkies, when events COULD transfix a whole nation in a way that, because the internet especially allows you to consume whatever you want and ignore everything else, I don't really think can happen anymore. Because this is Bryson, everything is awesomely written, often with little tongue-in-cheek moments that Bill always provides, for example on the French attitude to Americans at the time: "Patrons of many pavement cafes were assaulted and in some cases savagely beaten just for looking intolerably bourgeois", and his especially savage take on Herbert Hoover: "Two things accounted for Hoover's glorious reputation: he executed his duties with tireless efficiency and dispatch, and he made sure that no one anywhere was ever unaware of his accomplishments."

And Bryson is really what makes this book, just like all of his books, really dynamic and interesting and exciting. I didn't know I wanted to know about baseball until Bryson wrote about it, nor about boxing, or baseball, or so many of the things the book covers that I now know 100% more about. I feel better informed about America in the 1920s, but also like I've been entertained the whole way through. Whilst this book focuses pretty much exclusively on America at the time (see: the title), I think the format is a really exciting one because you could easily apply it to Britain's summer of 1927, or even any other year and still get a book as rich and informative and excellent as this one.

I lied when I said I was relieved the book finished early. I was kind of sad, as I always am to leave Bryson's writing. This one has done nothing to quell my love for the man, and I recommend it to anyone who has any interest in anything ever. This will make you care about things you never thought you would, and even if it doesn't then it will make you laugh in public, which I think is something we can all get on board with.
Posted by Laura at 08:30