I know, I know. It's shocking that I would be writing a post about books on my book blog. What even the what? But this is not the way of Sundays, and I feel like this is wrong, but I have two stacks of books to show off so what can I say? This is happening.

First though, some other things of this week:


And now for something completely the same... Books!

Yesterday I went to Richmond to meet Katie (no mean feat considering there was rugby at Twickenham and oh my goddddd rugby fans are obnoxious), which is relevant to books because hellooooo, we both have book blogs, and is relevant to my life because Katie is great and I had a really excellent time. We had cake and book shopping and no nandos because it was closed for renovations (SOB) and a seriously much needed talk about life and whatnot. And also did I mention there were books? JUST LOOK AT THEM: 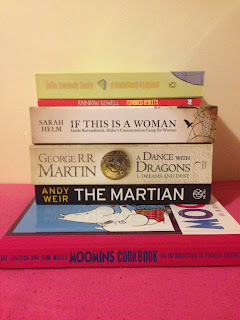 Ok, so. I know I'm not supposed to buy books, but... It's ok. It's all fine. Special occasions and all that. So. This is a fairly low quality photo so allow me to narrate, from the top down. I got A Confederacy of Dunces for reasons sort of unknown to me except that I assume someone read it and I have generally heard it is good. Was it you? If so, I hope you weren't lying. The teeny book down from that is Kindred Spirits by Rainbow Rowell, a little story she has written for (I believe) World Book Day and it cost £1 and frankly how could I not buy it? The next one down I shouldn't have really taken a photo of because I'm going to pass it on to my mum to give me for my birthday, but it's If This Is A Woman- Inside Ravensbruck: Hitler's Concentration Camp For Women which I read about in BUST and sounds totally harrowing but also sort of amazing. I finally, finally found the last Game of Thrones book I needed, A Dance With Dragons, Part I, which was very exciting but now I actually have to read the buggers which is a bit upsetting to face! I bought The Martian because I KNOW that everyone's been going on about how excellent it is, and I'm into that, and FINALLY we found the Moomins Cookbook in a charity shop and Katie offered to buy it for me as an early birthday present and I was of course totally into that! It's especially exciting because I've seen it for years and years but didn't necessarily want to pay full price for it, but charity shops are magic (plus in the end I didn't pay anything for it!)

Anyway. I know, naughty naughty naughty, but it has to be done every now and then, and now I don't have to go into any charity shops for ages because I've finally bought all the Game of Thrones books that can be bought!

I bet you thought I was done with this post, but wait! There's more! You lucky buggers. SO. Bex is hosting a re-readathon at the end of the month and I'm pretty excited. Her last one was kindofsortof arranged just for meeeeee because I had finished my Masters and was finally allowed to read what I wanted again, but it turned out that I sort of didn't want to read anything because can you say burnout? Yes, that. Anyway, I am determined to do it properly this time, and have arranged a modest but quietly sure stack of books to contemplate: 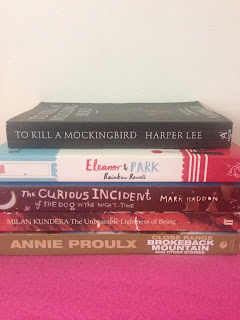 TA DA! I will frankly be ok with just reading Eleanor and Park and To Kill A Mockingbird (even if it means finally accepting that Harper Lee is actually dead which I just cannot) but I have reasons for the other three books, namely:
As I've been writing this, I had a sudden longing urge to also re-read A Tree Grows In Brooklyn so I think I'm going to add that to the pile and see if the urge remains. And please, join us! What do you want to re-read more than anything else in the worrrrrld?
Posted by Laura at 08:30