Last Saturday, despite a poor weather forecast, an early weekend rise and a crippling train fare, I made the bold and also brave decision to go along to the Bath Bookshop Crawl. Maybe it was madness, maybe it was the fact that I just really very enthusiastically like buying books, or maybe it was just the fact that I love our intrepid and excellent organiser SO much, but either way at about 10am on Saturday morning, I found myself outside Bath train station, trying to figure out which Pokemon Bath has*.

After a quick little scout around by myself, I met everyone at the coffee shop we were supposed to meet at (obviously...) where Katie immediately made the day awesome by handing me my very own Lego Laura: 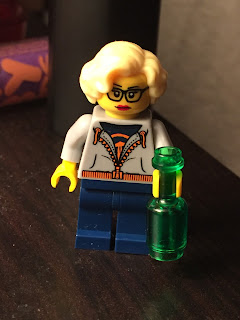 which is now basically my favourite possession and LOOK SHE HAS A WINE BOTTLE IT IS SO ACCURATE!

Anyway... I was a teeny bit later than others so when their drinks arrived and Katie had a strawberry milkshake, I needed one THAT SECOND because SPRINKLES 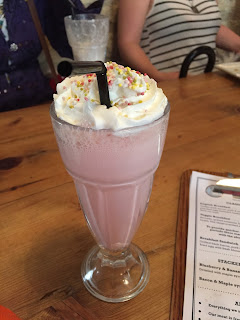 and then once everyone arrived, we set off to find all the books!

If I was an actual good blogger, I would have taken notes about each bookshop and the things I bought there, AS WELL AS taking photos of things other than milkshakes, but I think we can all agree that I am a terrible blogger so there is that. However, I am a thieving little blogger, so allow me to tell you which bookshops we visited (and in order, no less!) and how awesome each one was:

Good Buy Books: The good buy in the name refers to the fact that this is a discount (although not secondhand) bookshop, and it was pretty good for being one of those. Think The Works, only way less shit.

Scoobs: I am alllll about Scoobs. It's this secondhand book... area in this awesome covered market, and it is REALLY GOOD for secondhand books. At first glance I wasn't exactly convinced, but as I examined the shelves closer I found some books that I wanted so badly I had to borrow cash from Bex to buy them (I promptly paid her back, of course).

Waterstones: Waterstones Bath is a treat and a delight AND they thought we were special people (which obviously we are) so we got a free lunch and a goody bag from them and and and it was so great! I also bought books using some of the leaving voucher my old work got me (bless them) and one of the Waterstones stamp cards so really, I got free books, ya know?
But back to the lunch- I think we were all maybe expecting a couple of sandwiches and maybe some orange squash if we were lucky, but we had a fancy pants table complete with strawberry and lemon water, our pick of the sandwiches from the restaurant, crisps, cake, whatever drink we wanted... It was basically amazing. The store manager kept asking questions like we were super famous bloggers which made me slightly scared that I was going to be found out, BUT some of us (Bex and Ellie)
totally are famous bloggers so it's fine!
The point is, even if they hadn't treated us like royalty, I would fully recommend this Waterstones because it is just a little bit lovely. Plus they treated us like royalty, what can I say?!

Mr B's Emporium of Reading Delights: Because I was expecting something that would completely blow my mind from Mr B's, I was a little bit underwhelmed by it. Don't get me wrong- it's a perfectly nice bookshop, and if I hadn't known it was all famous and referenced in every book set in Bath (AND if it wasn't called an emporium) I think I would be wholly enthusiastic about it, but because I had the expectations, I was a bit like 'THIS is an emporium?' Still, I bought a couple of books from there and had a pretty good time so who can complain? NO ONE. Not even me.

Topping and Company: I loooooved Topping and Company (probably because I didn't have any expectations about it!). It's pretty much the platonic ideal of a bookshop, in that the shelves stretch practically to the ceiling and there are ladders to reach the very top (who said Beauty and the Beast, WAS IT ME? Sure) but mainly I think I liked that they have tables and chairs and serve tea to those who partake (most people), and biscuits even if you don't (me). So basically I think I liked it because I really needed the sit down, but the atmosphere and the staff and the whole experience was pretty great. I even took a photo there! 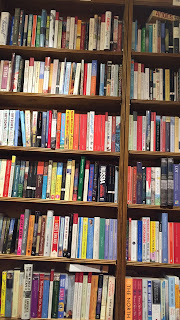 American Dream Comics: We arrived here suuuuuper late and we almost didn't find it and then we did and I inadvertently called the lady working there old... It was fine to browse around for 5 minutes, but any more than that and I think we would have struggled because there were a lot more comics (and pop vinyls) than actual book comics (comic books? Sure.) I'm gonna say this one is pretty missable, unless you wanna go in there and see if you think the woman who works there looks older than me because I THINK SHE DOES SO THERE.

Ahem. So that was all the book stuff, then some people left (some people left before the comics, actually), and some of us went to the pub which I was all about because it meant some more sitting, and also because I decided to get the train back with Bex and her sister and brother in law, because socialising, even though it was so busy that Bex and I didn't even get to sit together for most of the journey. But anyway, pub was good, drinking is good, fooding is also good and trains are awful.

In order to end this post on a high, I'm not even going to tell you about the GIANT WAIT I had at Reading station because all the trains were cancelled for some reason, but just that during this (giant) wait, I ONLY WENT AND CAUGHT A MR MIME! 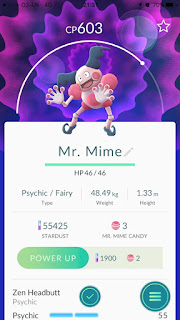 Highlight of the day? Of course not. But it was an excellent end to an excellent day. And I got all these books! 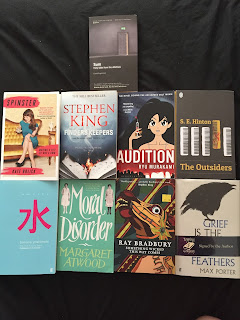