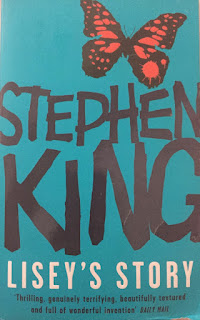 As I mentioned in my round up of last month's reads, it pretty much took me three months to finish Lisey's Story. If you want to get super technical about it, it took me about two months to read about a quarter of it, before I finished the whole thing in September. Part of it is definitely to do with its size- it's a hefty 650+ pages, so I didn't really want to be lugging it around with me, ya know?- but that wasn't it's only problem. I mean, come on, I read all 800 pages of A Game of Thrones in like a week because I cared, so obviously I'm capable. But this book. Whoa.

First and foremost, this book is called Lisey's Story. This mistakenly made me believe that the book would be about Lisey and her struggles and life and whatnot, but really the book should be called 'Lisey's dead husband Scott's story, told through Lisey's memories of things he told her before he died'. This isn't necessarily a criticism, although making Lisey the one with an interesting/devasting past would have been JUST FINE too, Steve, but the title makes it seem like her life is going to be more central to the plot when really she's almost the passive receptacle for her dead husband's memories. Which is obviously real nice. Putting that aside as much as possible though, the book just starts SO slowly. Lisey is recalling and recounting a particular incident in her and Scott's lives, and it just seems to take so freaking long to tell. I honestly felt like she told the same thing in three different ways, and after that I wasn't so keen to pick the book up again for any real length of time. Because ughhhhhh.

The book does pick up though, and it kind of runs along two paths- the stuff that happened in the past, told through Lisey's memory, and the stuff that's happening now. The way I see it, the stuff that's happening now (which, by the way, is also mostly to do with Scott and not Lisey) is kind of dull and boring even if murder is threatened, whereas the stuff that happened in the past seems a lot more vital and interesting (and, indeed, it does become the most vital to the plot in the end). Please note once again- the story in the past belongs to Scott, whereas the story in the present belongs (mostly) to Lisey. I guess housewives don't get to be interesting on their own merit in King's world?

But anyway. Like I said it picks up, and I finished it in a rush after being reluctant to get into it. King's world building is pretty special, and he has created within Lisey's Story a pretty special world that I could instantly and vividly imagine. In one sense, the way I feel about that world and about the book in general reminds me pretty much of how I felt about The Night Circus- the setting is fabulous, but the story isn't all that. And yet, I still think there might be something in Lisey's Story, that I'll come back to it in a few years and find it better than I did the first time round, in a way I don't think is true for, say, The Tommyknockers or Dreamcatchers, or any of the real stinkers King has written.

Lisey's Story isn't a REAL stinker, is what I'm saying.

Probably my favourite parts of the book involve Lisey as a sister. She really comes alive as a person in her own right when she's interacting with her sisters, and its when the book shows the human reality of family and obligation and of what that sometimes has to mean. It's this kind of shit that makes it pass the Bechdel test (not that that applies to books but whatever) and it's not like that's just thrown in alongside a romantic storyline, basically all the living love in this book is between Lisey and her sisters, even if it doesn't always look the way it's supposed to.

And so. The conclusion. This isn't one of King's books but it's far from my least favourite. I could have done with a real woman's story rather than a pseudo one, but setting that aside, it is still a pretty good story. I don't know if I've mentioned this before, but I've really been enjoying all the King books since the last Dark Tower one being new to me, because I feel genuinely scared by them- another reason I finished this so slowly is because I couldn't bear to still be reading it when it was very dark outside. The King pilgrimage continues, my devotion is still unwavering.
Posted by Laura at 09:00