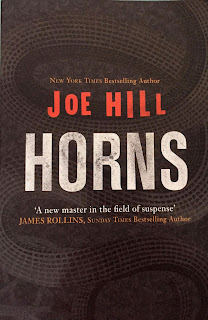 Joe Hill remains a constant happy surprise for me. It would be ridiculous for me (especially me) to claim that I didn't start reading his books because, y'know, he's Stephen King's son and all, but he has in his own right paved a little pathway in my brain of happy-thoughts-about-Joe-Hill. Because his books are good- good for scary stories and good writing and good ideas and just generally goodly good good. Horns is the third of his books I've read, and it might just be my favourite so far.

Horns opens by introducing us to Ig Perrish, son of a famous musician, miserable and hungover, and newly sporting horns growing out of his forehead. As the story goes on, Ig learns that he can hear people's innermost thoughts and can make them do things- as long as he suggests things that they kind of wanted to do already- essentially the devil on your shoulder, only without a counterpart angel. Whilst we don't know why Ig has these horns, we do know that he is one sorry individual because his girlfriend was murdered a year ago and although he was never formally charged, everyone in the small town he comes from and lives in believes he did it anyway. It's not a very nice scenario to be in.

That's pretty much the gist of the first section of the book (Ig's visit to his family and hearing their innermost thoughts about him being a particular lowlight) and if the book had been so unrelentingly bleak throughout then I'm not sure I would have liked it nearly as much. The second section, however, goes back to Ig's teen years, and it's here the book really comes into its own. Ig's teenage memories are kind of lovely. HE'S kind of lovely, and you're left with the impression of a life that's strayed so horribly far from where it was supposed to be that it's pretty bewildering. If you get to see Ig at his worst in the rest of the book, then this is him at his best- innocent and kind but not perfect, because let's face it, that would be boring. This was pretty much my favourite part, and it makes the whole rest of the book worth it because Ig is so damn loveable that you somehow manage to excuse his devilish behaviour (which is still so much better than that of characters in the book who haven't been supernaturally endowed with horns).

I'm not going to say Horns is a perfect book, and even I got a little bit tired of Ig being made out to be a perfect sinless person even though he constantly proves himself to be anything but, but it was pretty much everything I wanted from a book when I read it. It's interesting and gripping and kind of scary, and there's a really cool bit in a treehouse that I think rivals anything King has written about creepy centres of mystical energy (I know). Horns may be even more interesting to anyone who knows anything about the Old Testament beyond, like, Adam and Eve existed; although on the flip side someone who actually knows the Bible might find it kind of trite and silly- I don't know because I am in the latter group and went 'oh sure, the devil and snakes- cool!' Either way, I liked the idea that the book was underlaid by some kind of Biblical precedent, even if that's not necessarily the case. More than that though, I just really fucking enjoyed the book- I read about half of the first section on a Friday, and by Saturday evening I had eaten up the whole damn thing.

Like I said, everything I wanted from a book when I read it.

If you want a kind of detective story with some biblical undertones and excellent childhood flashbacks, then this is the book for you. If you want to be kinda scared and kinda disgusted, this is also the book for you, and if you just want a really bloody good read, then, you've guessed it, you're gonna want to read this. It's my favourite book of Hill's so far, and the first one that I'm actually really excited to re-read at some point. Now you go.
Posted by Laura at 09:00