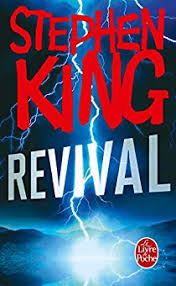 Blarrrrgh, I did not enjoy this book at all. I haven't said that for a LONG time about Stephen King, so I trust that you'll allow me to just not like this one. I'm not ok with it, and it's not an ok book. Is it as bad as, say, The Tommyknockers, or Dreamcatcher, or... (OK there must be some other bad ones, isn't there a stretch of bad 80s books?) Anyway, the point is, I don't really know the answer to that question, but the point is that I really didn't enjoy it, and it was kind of a bummer to get through.

But wait, I hear you cry. Don't you always find some good in Stephen King books, Laura? Well, maybe (except The Tommyknockers which is SO BAD you guys, don't even touch it, I swear- I've read it for you and that should be enough). I will say for Revival that it's consistent, it follows its main point through to the end, and the end itself, like when the book finally gets down to what it has to say (the main message being, 'Stephen King is afraid of death, or more specifically what the afterlife could be like') is wonderfully chilling and terrifying and omg please no. But also yes, can you go back and rewrite the book and make it more like this?!

Let's get a little more specific. The book starts with a promising sort of passage that suggests that sometimes the people who are important to your life are there the whole time, whereas other times they drop in and out of your life, sometimes at the most inopportune moments. This book describes the latter of these relationships where the main character* meets a priest at age 5 or 6, who then becomes integral to many parts of his life (and also, maybe a tiny spoiler, not a priest anymore). All of that is fine, and actually I pretty much liked the parts that involved the priest. These parts were all actiony, and you know they're building up to something, but just what that is is pretty obscure until the novel gets right down to it in the last, like, 50 pages or so.

So that's fine, but the problem is ALL OF THE REST OF THE BOOK. As I say, the whole point is that these meetings are infrequent but important, and that's how they feel in the narrative too. All of the rest of it is the story of the main character's life, and omg it is so boring. It's not that his life is boring necessarily, but it's more like 'so I grew up and discovered guitar and had sex with a woman and then was in some bands and then INTERESTING BIT and then I worked in the music business and played more guitar and ANOTHER INTERESTING BIT' and do you see what I mean? The actual action seems to happen way less frequently than all the bits in between, and although I normally like those bits (I really do!) I just really wasn't interested about them in this book. GIVE ME A BETTER NARRATOR NEXT TIME, KING!

So yeah, not one of his finest IMHO. I found it interesting to see where his mind was at (death death death is scary) and how (I think) it relates pretty much just to him aging, but other than that I can't see it being one I would ever want to read again. The fact that I haven't been able to say that for a long time I think reveals how excellent his work has been lately, so I'm willing to let him off with a warning for this slip up. D-, must do better.

*of course I can't remember his name
Posted by Laura at 08:30