July! You went so fast, and I shall miss you. This month I had to adjust to my fella's new working schedule which has essentially been working all the time, so I've been trying to squeeze in time with him whenever I can. Even though I've had a lot more time to read on the weekends I haven't so much done that, but I have done more traveling than usual which is optimum reading time. I have also been trying to get into some kind of exercise routine, by which I mean that I have a diary that I put a little yoga calendar in, and if I don't do yoga on any given day I have to put a cross in the box which is supposed to make me feel bad (it works like 2%, so not really at all). More importantly I have played tennis (I know!) which I am really bad at but which is also just really fun and good and I like it a lot so there.

But anyway, who cares about my health? We are all here for BOOKS, and oh my there were plenty this month. Behold! 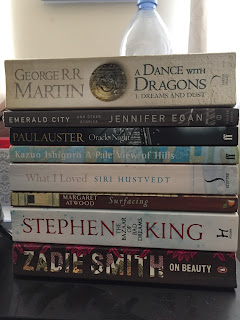 Such a beautiful group of creatures, oh my.

On Beauty by Zadie Smith
I started my month with one of my favourite reads of the year so far, and a book that I liked so much that I've even reviewed it already (I know!) Just read the review if you'd like to know more about it, but I found it very funny and annoying-in-a-good-way and just very insightful and excellent. I must read more of this Zadie Smith person, is she like famous or something *sarcasm font*

The Bazaar of Bad Dreams by Stephen King
I don't know if I've said this before or not, but I really feel like King's short stories of late have really started to surpass themselves (and they've always been good). There were almost no stories in this book that I didn't think were excellent, but you'll have to wait for my whole review to find out which ones were actually terrible (spoiler: it was the poems)

Surfacing by Margaret Atwood
This is a really early Atwood, and I just... ehhhhh, I don't know. I had a problem with it to begin with because it's written in the first person present tense (please, just don't) but it doesn't help that there isn't really a story to it (other than, some friends go to stay in the woods and one essentially has a really wordy and literary nervous breakdown [it's maybe only a nervous breakdown in my opinion]). I thought some of the sentences were beautiful and at a base language level it's a very good book- this just, for me, wasn't reflected at the story level. I can see how this would probably be some people's favourite book, but for me it was too much language masking too little story.

What I Loved by Siri Hudsvedt
I wanted to love this book so much. I can't really tell you why I thought I would, except for the tiny fact that Siri Hudsvedt is Paul Auster's partner (wife?) and shit I love Paul Auster and obviously the woman associated with him must be very interesting and also must write exactly like him because women are just extensions of men, right? Right. That much is obvious.
Ahem. But for reals. I got a bit impatient with this book almost from the start because books that describe fictitious works of art in great detail kind of get on my nerves a bit. This is saved quite a lot by the story in general (to start) but as it goes on, it gets to a really frustrating point where all the grown ups seem to act like morons rather than like actual people (intellectuals, amiright?!) There's sort of a mystery plot, but that bit's rubbish, and the book is only really good when it's dealing with life and human experiences and when it doesn't get, to my mind, a bit silly. I didn't really care about anyone towards the end, and it's only now as I'm writing this that I realise I actually liked this book even less than I thought I did... who knew?!

A Pale View of the Hills by Kazuo Ishiguro
Ah, Ishiguro. This book made me realise the thing that all of his other stories (that I've read) have in common- What he really does, is tell the story around the main story and forces you to fill in the gaps and decide what the actual story really was. I can't even tell if this is a technique I like or not, but I certainly didn't hate reading this book, even if it wasn't the story I wanted to hear. The story is of a Japanese woman who moved to England many years ago, but she is reminiscing about her time in Japan and about a particular woman who was a pretty terrible mother, leaving her child to roam wild and placing her affection for an American man above the wellbeing of her child. The ACTUAL story of this book is of the narrator's daughter's suicide, and what the events could have been that led to it, but I guess her reminiscings are related- she remembers the woman who was a terrible mother because she feels that she too must have been a terrible mother for her daughter to want to die.
In the end, I always feel as though Ishiguro is a better writer to study than to casually read for funsies, but I like to flex my literary brain muscles every once in a while and this book gave me a good opportunity to do that. Thanks, Ishiguro!

I feel like in the back of my mind I have always compared Murakami to Auster, but the whole time I was reading this book I thought 'this is very Murakami-esque', which it is, but it's also quintessentially Auster, too. This teensy novel has it all- mixed and mixing narratives, a weird shop that disappears and then reappears again in a different location, imagined indiscretions and probably real ones too, and oh man. It was just so good (for me. I can imagine other people reading it and thinking it was a mess). When I started reading it, I was rolling my eyes at the footnotes (footnotes. In a novel. That are part of the novel. Kind of annoying, yeah), but they were actually super informative and even though I feel like they could have been slotted into the narrative, they didn't feel out of place as footnotes, if that makes sense. The only thing I didn't LOVE about this book was the ending which felt a little rushed and sort of random, but I think that was kind of the point- you can pontificate and write fiction all you like, but in the end, real life will find you and bite you in the ass. Or at least, that's the message I got from it, anyway.

Emerald City and Other Stories by Jennifer Egan
I don't think I've been consciously saving this book for any reason, but I do know that as soon as I read there was a new Jennifer Egan book out this year, I chose to read this one. Although I love A Visit from the Goon Squad, I never thought any of her other novels reached the heights of that, and I think I now know the reason- Egan is a short story writer, not a novelist. A Visit from the Goon Squad, I know, is a novel, but it's a novel where short stories interlink rather than following a strict narrative. This collection of short stories is excellent- tense and interesting and intriguing and filled with so much human nature that it's almost too much. It's super telling to me that this is the only one of her books, apart from Goon Squad, that I am choosing to keep for always, and yeah, you know what, it's just pretty great.

A Dance With Dragons I: Dreams and Dust by George R R Martin
I snuck this one in right at the end of the month because honestly I just want to get the Game of Thrones books away from me now- they're damn heavy, ok?! This was pretty engaging and thrilling, and I think I've finally reached the point where the books are really quite different to the TV series, which would be ok except that I go 'but... that's not what happens' rather than 'oh yeah, that makes sense' because as I believe I have made clear already, THAT TV SHOW IS KING, OK?! Still, the book was fun and exciting as always, and I'm onto the second part of it already, so... I guess I can't hate them that badly.

Books! Huzzah! Quite a big reading month even though I felt, as always, that I didn't really have much time to read. In August the trains are all going to be baaaaad for most of the month, which will involve me getting the bus in the mornings as well as the evenings which should give me many extra reading times but who knows if that will actually be the case!