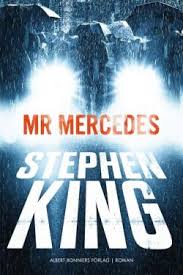 I had a lot of fun reading Mr Mercedes. Even though I (naturally) relate King to alllll of the supernatural goodness that he brings to us all, when he writes a 'straight' novel (with the teeniest hint of a slightly above average intuition) he still kills it. Mr Mercedes is more along the lines of his True Crime books, in that it is about, well, a true crime, only it's fictional... Ok I'm rambling.

HERE'S HOW IT GOES: The story begins with a horrifying crime when a Mercedes plows into a group of people who have (wait for the heartbreak) been waiting outside all night for the possibility of getting jobs. Many people are killed and the killer gets away scot free. Flash forward a few years later (don't ask me how many because I read this quite a while ago now) and the detective who worked on the case is retired and watches a lot of tv and is getting a little too friendly with his father's gun, if you know what I mean. He gets sucked out of his retirement blues by receiving a letter from the Mercedes killer, which drags him back onto a case and out of retirement, which is really exactly what he needed.

Here's a thing that I think is special about this book- we, the reader, knows who the killer is almost from the beginning. This is not a whodunnit, there's no straining the brain to try and figure out which minor character is a big murderer, because we already know that. The question with this book is really, 'what is he going to do next'? I really enjoyed this, because firstly, I find it really stressful to try and work out whodunnit, and it really makes me question my, like, intelligence skills, and secondly, doing it this way meant that we got to see into the fucked up brain of someone who murders for no reason. It was really a wild ride though the head of the murderer (I'm not being coy, I just genuinely can't remember his name...) and although the novel provides some tentative evidence for the growth of his psychopathy, it also doesn't use those reasons to let him off the hook, which I enjoy.

Let's also talk about the detective because he was pretty great. I'm sure the novel says how old he is, but I totally can't remember, so let's say... 60? And for a 60 year old, let me tell you, he's pretty foxy in my head. I'm not sure how, cause the book also says that he's totally gotten fat, but I guess his seeking out of justice just makes me super into him. Attractiveness aside, he's just a pretty good character- reckless and impulsive but generally good meaning, and with a couple of mismatched sidekicks who end up being very excellent. I think the novel holds back on explaining too much about any of the main three 'good' characters because- wait for it- there are two more books in this little series and I am VERY EXCITED about that (especially cause my next two King reads are those too books and yes I am behind in reviewing and yes those are basically the last two books omg I know right?)

But anyway. Yes. Mr Mercedes gets two thumbs up, I am a fan. I totally give you my permission to read it, and it'll even work for you if you get scared by horror, just not if you're scared of being senselessly and randomly murdered one day... And if you're not, then WHY not?! A topic for another time, I guess.
Posted by Laura at 08:30