Things I Read In June

Ohhh boy, June was a tough month for me, you guys. Two of my housemates left (trust me, this was not a bad thing) which meant that, because apparently everyone else I live with is incapable, I had to find two new housemates, one which I had a month to find and one I had to find in TWO WEEKS because, again, everyone else is FUCKING INCAPABLE. On top of that, I applied for the job that's the stage up from my job and had to deal with the stress of that and the interview and everything (AGH!) and I had no bathroom for the last week of the month. To say it was just one thing after another would be quite the understatement.

But there were some good things too! I celebrated 6 months with my fella and we went to the zoo which was GREAT and in general weekends have been a pleasure whilst the weeks have been eh. I also worked about 12 hours more than I needed to which doesn't sound like a good thing because work but is actually excellent because I get to play with those extra hours by having flexi days off and just generally shorter hours on some days, which I will sorely need this month when my boyfriend starts working all the weekends (seriously, like all the weekends...) but has days off, so yes. Forward planning, folks.

Anyway. Somehow, through all the stress and horrors, I managed to read SO MUCH in June. I got through 9 books, and even though two were comic books, that still makes 7 novels devoured in June. I guess we should put it down to extra daylight hours or something? Definitely or something...

Anyway, look at them! 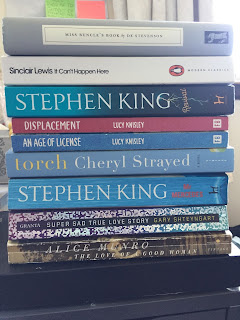 The Love of a Good Woman by Alice Munro
I went through a phase of buying Alice Munro books whenever I saw them and never actually reading any of them. I figured it was a good time to figure out if I actually liked her writing style or not (cause, you know, if not I could get rid of some books!) but it turns out, yep, she's pretty great. This collection of short stories was grittier than I expected, which also made them more interesting than I expected, and even though I couldn't tell you what happened in most of the stories (I read NINE books this month, guys) I know there are parts that will stay with me for a while, which is all I can really ask for at my advanced age.

Super Sad True Love Story by Gary Shteyngart
This was good, but maybe not as good as I was expecting. A really long time ago I read an extract from this in The New Yorker and I thought it was super interesting so I bought the book when I saw it. A million and one years later I actually read it, and it's a pretty good dystopia set in the not too distant future where the dollar is worthless and young people literally can't connect with anyone and can only consume and consume and consume because that is what technology does to us if you're a total pessimist. This was a decent dystopia, but for me not such a great love story because I just didn't get it... The guy is literally THE WORST and the girl is kind of great but also kind of not, but shallow  enough that she would never go out with this guy so in that sense I just didn't really believe it. But still, it was decent enough to keep me entertained and to prevent me from having to watch cricket so what more can you ask for?

Mr Mercedes by Stephen King
It's a Stephen King so OBVIOUSLY I'm going to review this in long form, but let's just say I enjoyed this a lot and I'm really glad that it's part of a series and I get to hear more from these characters. It's twisted and upsetting and so good I can't even.

Torch by Cheryl Strayed
I bought this book a long time ago but about a month afterwards my nan died and the thought of reading a book that is centred around the death of a mother was too upsetting and I put it back down every time I picked it up. I'm glad I finally read it because this book was actually excellent- I'm not sure I even cried at it because it doesn't go straight for the emotions but tries to seriously and insightfully look at all the different ways of grieving- it's not always about sadness, but about resentment and guilt and, especially in this book, doing whatever you want because nothing seems to matter any more. This book has done nothing to damage my love of Strayed's writing, and really just makes me want more fiction from her, please please please.

The Age of License by Lucy Knisley
Ah, Lucy Knisley. I bought this and the next book as treats for myself for being a brave girl when I had to have a medical thing done last month, and although I tried to save at least one of them for later, I just... can't do such things. This one is a chronicle of a month Knisley spent travelling through Europe and having a beautiful love affair and I enjoyed it ever so much- especially her reunion with French milk because damn that girl loves the milk in France. It is, as ever, excellent work and you should almost definitely read this.

Displacement by Lucy Knisley
Similarly... Displacement was actually a little harder to read than The Age of License, in that it's about a cruise Knisley took with her elderly grandparents, and how difficult it was to deal with their various ailments and whatnot, and it hit me right in the feels. It's still excellent, but it's more like a harsh reality check when compared to the dreaminess of An Age of License.

Revival by Stephen King
After a really good run of Stephen Kings I've loved, I've finally come to one that just kind of bored me. Full review to come, but this one had a good (horrifying) ending but that was kind of it, in my opinion. Mehhhhhh so hard.

It Can't Happen Here by Sinclair Lewis
I bought this because it's been everywhere this year as some kind of fortune telling book about the Trump presidency. Although there are some similarities between the moron President/dictator Buzz Windrip in this book and the moron President currently running America, this book was slightly more terrifying since a dictatorship is declared literally just after inauguration, concentration camps are established and basically this is Lewis's answer to people saying that America could never become like Nazi Germany (it was written in 1936). I wasn't sure exactly what to expect from this book, and although I found it hard to become motivated to read it, once I was into it I couldn't put it down. It helps that it was told from the perspective of a member of the resistance (viva la resistance!) and that it is essentially a dystopian novel, and yeah, it's pretty good, if not as prophetic as, say, Waterstones, would have you believe.

Miss Buncle's Book by D E Stevenson
Another month, another Persephone novel. This book was adorable- sharp and witty and romantic and lovey and I am running out of adjectives but basically it was just GREAT! Miss Buncle writes a book about her neighbours and the worst of them hate it (because it shows them as they are) and try to out the writer as the writer (Miss Buncle) is busy writing another book about how ridiculous they all are. I can't even express the pure joy this book brought me (especially after It Can't Happen Here) and you should definitely read it if you can get your hands on a copy.

June! Reading really did its job of taking me away from real, horrible life, so nice job books. I'm hoping for a July that's much less stressful, but with just as much book joy.
Posted by Laura at 10:12