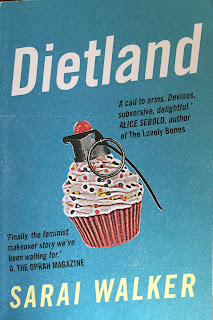 I liked it a lot, is what I'm saying.

The story is Plum's. She is a woman, living in Brooklyn, working for an evil media conglomerate where she tries to respond to the problems of teenage girls, who believe they are writing to the editor of the magazine (who is a real dick, btdubs). Plum also weighs 300lb, barely leaves the house except to write at her (only) friend's cafe, is on a low dose of anti-depressants and also hates herself so desperately that it hurts. Well, it hurt me, anyway.

One of the soundbites on the back of the book calls it 'a manifesto disguised as a beach read' and I think that's just such a spot on description of it that I'm totally stealing it. This book is very well written, and so easy to just fly through, but once you get to the end, you have read a book where (finally!) a fat woman has learnt to love herself without losing weight. I know, I know, the concept is completely unthinkable (*eyeroll*) except I honestly believe (or maybe just hope) that as a society we're getting to a stage where people are learning to love and embrace what makes them different rather than literally hurting themselves trying to fit into some mould that the media has told them to fit into so that they can make a shit-ton of money. What I'm saying is, I think this book is very timely indeed.

Even though I flew through it, in one sense Dietland was hard to read in places. It became incredibly frustrating to hear Plum's thought cycle of 'once I'm thin I'll do this' 'I can't do that cause I'm still fat' and essentially stopping herself from participating in the world because of her physical appearance. I understood it, and I know that it happens with real people, it was just so upsetting and frustrating to be a part of via Plum as proxy. I guess for me, this is mainly because I am already a pretty comfortable chubby person- in fact, I recently lost weight because my doctor told me to and I'm pretty obedient/don't want to get cancer, and it made me more uncomfortable that people were commenting on how good I looked than I felt uncomfortable being that bit fatter, as if I was somehow worth more because I now have a slightly smaller BMI. I guess what this means is, although I loved this book, I didn't exactly need it, whereas I think there are probably women out there who desperately need a book like this- they just don't know it yet.

And so, feminism. This book is so feminist it's unreal- Plum learns that, by not buying into the idea she has to be thin, she sidesteps so many uncomfortable realities that women who do buy into that are really buying into- the idea that women should take up less space than men, the idea that 'fuckability' is the most important aspect to a woman, the idea that looking like what a man wants you to look like (and again, this is only the media's idea of a man who only wants the media's idea of a woman!) is the only thing that matters. This book manages to explore many important and uncomfortable issues with the lightest of touches. There is also a subplot that involves what is essentially a group of feminist guerillas, and whilst I didn't necessarily agree with their methods, I couldn't argue with their results- half naked women on buses are replaced with half naked men, The Sun has male Page 3 models instead of female ones, the world becomes, just for a little bit, not all about the fucking male gaze.

So yeah, seriously, this book is so great.