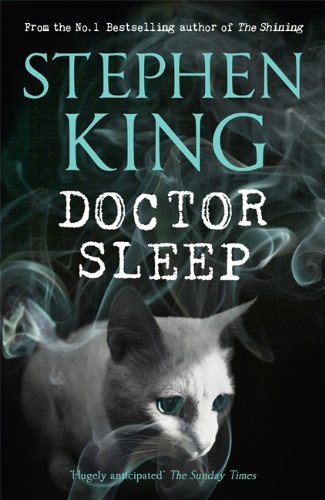 Of all the King books that have been released after starting my long voyage, Doctor Sleep is the one I was most apprehensive about. The Shining is a pretty iconic book (don't talk to me about the movie, but the book, yes) and if there was something I didn't think I needed, it was a sequel to it. I'm not sure that this book exactly convinced me that I needed a sequel, but I still really enjoyed it all the same.

Let's see. This book starts by taking us to Danny about 3 years after the events in The Overlook, where he is being haunted again by some of the gross things he saw there. Dick Halloran tells him how to get rid of them, and we are then transported through time (that happens a lot in this book which is one of its strengths- we'll get onto that later) to see Danny- now Dan- as an adult alcoholic, drinking almost all the time to try and dull the memories and the shining- less intense as an adult than as a child, but still irreducibly there. We actually get to see him hit rock bottom, stealing from a woman who quite clearly has nothing, and leaving a child in a dangerous situation.

It was at this point that I was worried about this book. I didn't want to see the destruction of Danny from The Shining, and I didn't know enough about the book to be sure that he wasn't going to go down a Jack Torrence path of destruction rather than going to AA. Spoiler, but reassurance- he goes to AA rather than on a killing spree so you are totally going to be able to read this book, don't panic.

Danny (Dan) is not even really the main point of this book, however. This is his story, but it's also the story of a long-living group of almost vampires, who live not off blood but off of whatever is produced by children who shine. It's also also the story of Abra, a little girl who does shine, and who shines extremely bright. These three elements combine together over time gaps and physical distances to make a story that's really intriguing and exciting and oddly road trip-ish, but you know. In a bad way.

In a lot of ways, I think the best thing about this book is the time gaps. What it allows is for us to see large cross sections of Danny's life, from rock bottom, to finally finding help, to then being able to help others. As much as The Shining was incredibly insular and takes place over a few weeks/months, Doctor Sleep takes place over decades, making it much more roaming and a whole overview of a person's life, rather than giving us a small snapshot of what Dan's life is like afterwards. King pretty much says that he wrote this book cause people always asked him what happened to the kid from The Shining, and so he got to wondering that himself. Here he answers the question not with a single event but with many, and you know what? It ain't such a bad life at all.

And so. The completely unnecessary sequel turned out to be pretty great, and definitely worth your time and attention. I like and root for Dan as much as I liked and rooted for him as a child, and I'm really glad that this book didn't do anything bad to the legacy of The Shining, even though I feared it would. It's good book, people. Good book indeed.
Posted by Laura at 09:53