Devouring Books: If This Is A Woman by Sarah Helm 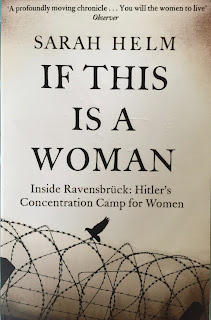 When I think about things I've read about the Holocaust, I come up with Maus, The Diary of Anne Frank, and that's kind of it. I honestly couldn't tell you if I've been intentionally trying to shield myself from reading about horrible things, or if I've just been a lazy scholar in this area. I learnt about the Holocaust at Secondary School (but that's it) and I've also been to a Concentration Camp and even the place where the final solution (uck) was decided upon*, but I've still remained pretty ignorant about most of the horrifying things that happened in the camps during the war.

Fittingly, If This Is A Woman is a really comprehensive book about the activities of the Ravensbruck Concentration Camp, a camp that nobody ever really knows or talks about. I can't tell if this is because 1) it wasn't a death camp (as in it didn't have gas chambers until right at the end of the war, not that many many didn't die there because of the awful conditions) 2) it wasn't strictly a Jewish camp because the agenda for Jews was obviously death and so they didn't tend to stay at Ravensbruck long, or 3) because it was a camp, in fact the only camp, that was exclusively for women. I don't want to be cynical and say that because women are the only ones that suffered and died there it has been viewed as less important and not as worthy to discuss, but I guess I am saying that so please have some of my cynicism, it's free!

Ok, so. As I've already said, I have nothing really to compare this book to, but in my opinion, it was a really really good chronicles of the experiences of women in the camp. I can't say that I exactly enjoyed reading it because, come on, but there were times when I couldn't quite put it down just because I was filled with horror, and, quite frankly, I wanted to get to the end where, at least, some of the women would survive.** This book, however, is packed with information and research, and although there were points where I just wanted to not know anymore, I also felt like reading it was an important thing to do- not even for me, really, but for everyone to know how horrifying things were so that we don't let this shit happen again.

I think for me, the best thing about this book is that it's all about the women's stories. I think Helm interjects as the narrator only in the introduction and epilogue, and only to describe her feelings upon visiting the camp and also explaining how she tracked down some of the survivors. Other than that, it is only the women's voices we hear, describing the things they lived through and also describing the women they loved who didn't live through them. I still don't know if I've remained ignorant through choice or because, y'know, I've been reading other things, but I know for a fact that I've always tried to not hear about the medical experiments Nazis carried out on prisoners (if I go through my whole life not knowing what they were doing with twins, for example, I think I'll be good). This book, however, did not allow me to look away, and now I know about some horrifying experiments that I suspect don't even scratch the surface of the evil shit the Nazis were doing to people. It's not like I didn't know they were bad, but shit, dude. They were doubleplus bad, you know?

I think this review has mostly revealed my ignorance of the Holocaust before reading this book, but i guess that's ok. I read to entertain myself, mostly, but this was absolutely an instance of reading to educate myself. I feel as though it has opened a door to probably more Holocaust reading, but in a little while so that I have a chance to recover somewhat (I realise this makes me a total pansy compared to people who fought, hard, for their lives every single day, but hey, I gotta do self care). In my completely uninformed opinion, this is a really good example of a Holocaust chronicle, and if you want to look specifically at the women who suffered, then this is, I think, a really good place to start.

*It's this gorgeous house in the Berlin suburbs and it just does not deserve to be that beautiful. But it is. Sorry.
**Alas, the end is pretty grim- many women were killed in air raids just outside Ravensbruck after they'd been freed, and many many more were raped by soviet soldiers who were there to liberate them. Yay, men!
Posted by Laura at 10:21