Greetings, intrepid readathoners! It's today, it's today, it's today! I first readathoned 6 (!!!) years ago which makes me a partial veteran but nowhere near as much as some of todays participants. That readathon was my best effort (I think I got maybe 4 hours sleep?) and won't be beaten by today, but I do plan to spend The. Whole. Day. (from 1pm) reading which, honestly, is good enough for me!

I'll update on this post for ease of life, and, well, let's begin! 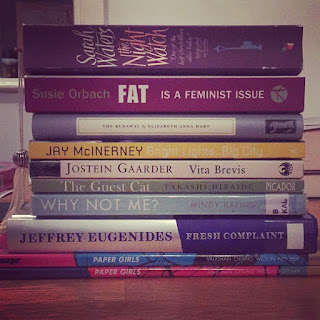 1. What fine part of the world are you reading from today?
Surrey, England. I used to be able to say London but I moved in September and I'm really sad about having to say I live in Surrey again (but, that's the only part of my living situation that makes me sad, which is good!)

2. Which book in your stack are you most looking forward to?
It's probably Fresh Complaint by Jeffrey Eugenides even though it's one of the bigger books in my stack... Because, NEW EUGENIDES WHAT EVEN IS THIS LIFE?!

4. Tell us a little something about yourself.
Ummm, let's see. I'm a feminist, vegetarian reading nightmare and also super awesome and cool? Or something like that, I don't know I'm pretty tired already.

Oh heyyyyy I'm here and I am not dead! Yes! I've been reading but maybe not as much as I had anticipated cause my boyfriend has the weekend off which almost never happens so obviously he needs like... 20% of my attention? Maybe less, if he's being annoying.

ANYWAY. I haven't finished a book yet but I've had fun spending the majority of my afternoon reading, so what more can I ask for? Exactly.

Books Finished: 0
Pages Read: 182 (SHOCKING I KNOW)
Snacks consumed: I ate a lot of crisps, basically for my lunch, but my favourite snack has been a cupcake THAT MY BOYFRIEND MADE UNSUPERVISED. I'm pretty proud, I can't lie.
Communication: Basically none with the internet... Sadface. I think I'm having a bit of a quiet readathon this time, chicks and dudes.

I FINISHED A BOOK and then two more because comic books are magical and I have had Paper Girls 1 & 2 out of the library for too long. I have decided to do the 10 books in 10 years thingy, not just because the prize is excellent, but just because it's fun choosing books and stuff. I basically never read books in the year they are published, so it will be genuinely interesting to me to see what books go with each year (relying heavily on google for this) and which one from each year I like the best! So:

Ok so fully half of this list was formed of the King family, but what can I say, they write good books? Also as I suspected, there were years where I struggled to find a book I had actually read (and I didn't want to go through the ENTIRE Goodreads list...) so ehhhh what can you do? Also, this was fun! Now howsabout some stats?

Books Finished: 3! What a turnaround!
Pages Read: 504
Snacks consumed: veggie sausage rolls, southern fried 'chicken' bites, mozzarella sticks and really nasty mini onion rings. There is nothing like health going on in my flat today.
Communication: I did two instagram posts and I posted my last update on twitter. That counts as communicating, right?

What is this? Two updates in two hours? As far as I'm concerned, that can only mean one thing- I'm going to beddddddd! No longer the hardcore readathoner, I do actually get all the sleeps now during the readathon, but since I've just started reading Jeffrey! Eugenides! Short! Stories! I will for sure be back in the morning. All the UK people reading through the night- shine on you crazy diamonds, and all you Americans/Canadians/South Americans etc for whom it is now daytime, damn you are lucky, and keep keep going! I'll catch you in 8 hours (loljk I don't sleep that long basically ever)

Books Finished: 3
Pages Read: 540
Snacks consumed: Nah, it's just too late. Or too near bedtime, I should say.
Communication: Nah, and even my fella's asleep now. Definitely time to sleep, ya know?
Posted by Laura at 13:17