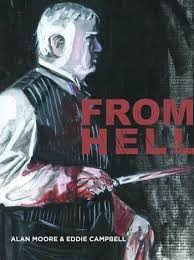 I think (and hope) that we've all seen the Johnny Depp movie version of From Hell. The first of Alan Moore's comic books to be taken to the movies, it involves Johnny Depp as a opium addict widower Fred Abberline, hanging out with Mary Kelly herself and generally being rather handsome and detective-y. Oh, and Jack the Ripper is sort of there too. I guess. Alan Moore hates it (as he hates all adaptations of his work, I understand) and now that I've read the comic book, I kind of hate it too.

This comic, man. It's just so much... More. More than the movie, but also just more than most comic books*, which is really what I've come to expect from Alan Moore's work. This version of the Jack the Ripper story, if you're unfamiliar, involves a disturbing plot between a doctor and the crown, secrets and blackmail and a crochety old detective who is married and not addicted to opium, and who is definitely not Johnny Depp. But, you know what? That only makes it better.

I've picked up From Hell in bookshops about a bazillion times, but after the price, the main thing that has put me off from buying it was the drawing style. I found it a bit... I don't want to say scribbly, but yes I do. Having actually read it (I got it from the library, I'm not a millionaire) I now see that it's actually the perfect art style for the story. The pictures dissolve as the murders become more frenzied, and it's dark as hell but, you know, Jack the Ripper. It's supposed to be dark, or you don't really understand what happened.

It's just so comprehensive. All angles are covered, and even though nobody knows who Jack the Ripper was (obviously) I remain fully convinced that the version of events From Hell presents is the correct one. You're going to have to read it to find out exactly what that is, but I am so behind this theory I can't even. My excitement for this book was so intense that I found myself wanting to drop everything for it, leave work early and cancel all social engagements just so that I could read the damn amazing thing. All angles are covered, all tragedies explored, and there's even a glimpse of the future, for the man who brought the world into the twentieth century.

And yet. As much as I loved the book itself, I loved the extra part of this comic, right at the back, even more. This is probably just because I'm a bit of a history nerd, but this extra comic explores the history of Jack the Ripper theories. It talks about, and debunks, quite a few of the theories of who Jack was, about why Moore chose this one specifically (VERY CONVINCING) and in general, about how pointless it is to believe you can actually solve the mystery, but how very tempting it is to try. I'm pretty happy that Moore tried, and you will be too if you give this comic a read.