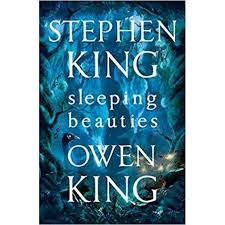 I read Sleeping Beauties so long ago now that it seems somewhat redundant to review it, but can I let you myself down by not reviewing a Stephen King book? I cannot! So I'll do my best.

It feels now as though I spent a good chunk of January reading this book, which is kind of true because it was too giant to carry round with me, so I had to spend a lot of time at home reading, which is not always how I read these days (it mostly happens on a bus. Or in my lunch break. Basically fit in around other things). It was nice, though, to put the actual hours in, and really hunker down with a book, rather than just reading it around other things.

Anyway. To finish stalling... Sleeping Beauties is about a world in which the women are all falling asleep, and cocoons are wrapping themselves around them. To rip one of these open is to risk almost certain death, because the women react horribly violently to anyone trying to wake them up. Why and how this is happening is shrouded in mystery, and how to fix it is equally as troublesome, and the town we're focused on for the story's sake has mutiple problems and obstacles to overcome once the women (who include the prison warden and police chief) succumb to sleep.

This book is kind of about the value of women in society, and about the shitstorm that would be left behind if they all suddenly went away one day. This novel explores the immediate effects of this (everything goes to shit, basically) but also takes a look at what would happen if this was a permanent state- how the world would cope without women (obviously, essentially it would end, after that generation was dead). It's all very flattering that women are so important, but at the same time, for a book with this message, it feels as though it should maybe be more about the women themselves than the men who ruin things. I felt like a lot more airtime was given to men in this novel (since, ya know, the women are falling asleep) which somewhat muffles the 'women are important!' message.

And yet. It's still pretty great. I found myself wanting to come home from work as early as possible so that I could read this damn book. As King does so well, he grapples with a large cast of characters with aplomb, and holds on to quite a few separate threads of story all at once without dropping any of them. The narrative, in spite of all the different parts, feels remarkably tight and nothing peters off like sometimes happens in King novels, and I meannn, yeah, it's pretty good. Feminism he doesn't do excellently, but storytelling? He's a master.

Also I guess Owen King did some things too, sorry baby King!

Basically, it was really nice to have a new Stephen King book to read after a few months away. I'm not sure if it's possible for me to truly hate one of his books (ok, except for The Tommyknockers. And Dreamcatcher) and this one is no exception, it's pretty good. I criticise because I love, and I read because I really really love.
Posted by Laura at 08:30