Oh haaaai, March! I've been waiting for a long time for spring to come, but just as the days started to get longer, THE SNOWS came. I am just shaking my head at the weather right now, to be honest, but what can you do? Soon, real spring will be here. I hope.

February was pretty nice but, as February does tend to be, sort of unremarkable. I went to London far more than can be thought of as healthy, I did THE BOOKSHOP CRAWL (definitely a month highlight) and, well, I ate a lot of chocolate in anticipation of this long long month without it. Sigh. My reading month was odd, in that it started with a load of reading, then tapered off in the middle, I guess coinciding with my new job (oh yeah, that happened too, I suppose!) and picked up again right at the end. Let's take a look: 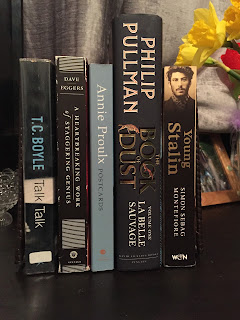 Such dark spines this month!

Talk Talk by T C Boyle- I can no longer say that I think I like T C Boyle but I've only read one of his books, cause I've read another of his books! I can say that I DO like T C Boyle, and this book was very good. It's kind of a crime/road trip/relationship/drama which is definitely not a genre but what can I say, it covers a lot of ground. It's about a woman who is a victim of identity theft, and how far she'll go to get it back, and about the man who loves her enough to try. Interestingly, it's also about the guy who stole her identity, which added a whole extra dimension to the story that I wasn't expecting but really liked. It's a good, good novel.

A Heartbreaking Work of Staggering Genius by Dave Eggers- I wasn't sure how I was going to feel about this book because, you know, who has the gall to call their book this, but I knew I was going to like it when, in the introduction, Eggers apologises for the part of the book that's about people in their twenties, because the lives of people in their twenties are so boring (he's not wrong). I don't know if I'd call this book genius, exactly, but it is very good. Eggers lost both of his parents about a month apart when he was 21/22 and then raised his 7 year old brother, and wrote this book about it. This is, obviously, heartbreaking, but that's not exactly how Eggers writes it- he more avoids the major topic and goes straight for more self obsessive writing until (it seems) his anger about everything he's lost almost leaks out around the edges. I feel like this book is difficult to describe, so I think you should probably just read it, ya know?

The Little Book of Hygge by Meik Wiking- This was some kind of kindle deal at the start of the year so I bought it and revelled in its cosiness. Hygge is the Danish way of living that is all about being around the people you love, getting cosy in soft lighting and just generally enjoying the small pleasures in life. The book definitely explains it better than me, and just reading it made me want to sit under twinkly fairy lights and drink wine and read. Sigh. Hygge.

Postcards by Annie Proulx- Oh hey, I reviewed this already! Woohoo! In short: it's kind of like short stories, only a longer story, and it's very Annie Proulx like. If that's a thing.

The Book of Dust Volume 1: La Belle Sauvage by Philip Pullman- I loved this book. I realised as I was reading it that it's been a long long time since I read His Dark Materials trilogy (like, 10 years of a long time) but it was a total joy to be back in Pullman's world that's kind of ours but also not ours and yeah, that thing. This book looks at Malcolm, a fairly regular boy who is thrust into situations that are way too mature for him and that he is completely unprepared for, and yet, he does so well. It's fantastic and exciting and ugh, it's just so good. Shout out to my sister who lent it to me and wanted a shout out...

Young Stalin by Simon Sebag Monetefiore- Ok, so. I have a disturbing lady boner for young Stalin and his face. This book has long been a joke between me and any book friends I go shopping with, until I finally had to buy it, and finally finally I had to read it. I don't read many history books and I know practically nothing about Russian history, so I can't say objectively if this was any good, but all I know is that I've learnt a lot about young Stalin and his journey to Stalin-hood. It's also pretty engagingly written for non-fiction, and, you know, there are photos of young Stalin inside so everyone's a winner. *creepy smiles all round*

And that's what I read in February, basically. For the first time in a long time, I actually finished off the month by finishing a book, so I get to start afresh with a new book today. It's very exciting, obviously. And oh hey, what about that challenge thing I've been good at doing?! Well, March's prompt is to read a book set in a different country than your own, written by an author from another country than your own, or a book in which the characters travel. I meaaaan, I could read many of the books I own for this one, and I suspect most of the books I read this month will not be set in England, but I am specifically choosing: 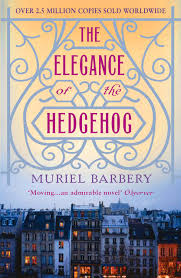 The Elegance of the Hedgehog by Muriel Barbery! It's set in France, the author is French, I don't know if there's travelling, but France! That is not where I live! I have had this book for the longest time, so long that my friend totally borrowed it years ago and I still haven't read it, so this is quite a moment for me. March, I'm ready for you, and I hope you all are ready for March too.