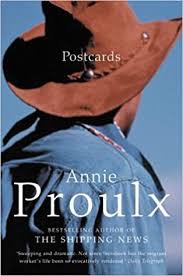 *Beams proudly* Hey, look at me, keeping up with challenges and stuff! This month's monthly motif theme was books with one word titles, and Postcards was my pick from all of the many books I still have outstanding (although I have surprisingly few with one word titles...) Here are my thoughts on it.

I have a weird relationship with Annie Proulx books, in that my brain seems to act like teflon around them. Nothing sticks with me, and I find that I have to read things over and over again to try and understand what's happening. I'm sure this isn't a failing of Proulx so much as my brain (I have the same problem with The Great Gatsby, in that I didn't even understand that there was a story so much as wonderful sentences until I saw the movie, FOR SHAME) but it still makes me somewhat reluctant to pick up her longer works over her short stories, which seem to stick better. I had thought that Postcards was short stories, as they kind of are in life, but nope, this is one of her longer works, and also her first published book.

In a sense, though, it was short stories. Postcards covers a long period of time, in not all that many pages, with the strange effect that, even though we are looking at the trials and tribulations of one family, it is in tiny snapshots, set years apart, at integral and often devastating moments for the family. Each moment, each event, is like it's own short story, and as this is where Proulx really comes into her own, I wasn't mad about it. I actually found it a really interesting way to stage a novel, not focusing so much on the everyday, but on lifetimes and what they really boil down to.*

As for the story itself? Well, bear in mind I have that teflon thing happening, and I'll do my best to tell you about it. The book starts with Loyal Blood (excellent name) doing something bad (this is one of things it took me the longest to figure out, but I think it's supposed to be that way) and skipping town,  'with his girlfriend' who he has actually just buried on his family farm. It's pretty much because of this that I found it hard to have sympathy with Loyal throughout the rest of the book, but that's not really the point- I never find Proulx as one for morality, or trying to make you think a certain way, she pretty much just presents things as they are, and lets you decide for yourself.

Anyway, Loyal sends postcards home over the years, and various other people send postcards that are vaguely linked to the story in various ways, and it's a pretty nice way of tying things together (lest you think of this book as a load of connected short stories...) It's all a little bitter because Loyal writes home to a family that is disintegrating, that is split up, that various other bad things happen to that I shan't tell you about because of spoilers, but if I tell you that they're American farmers, you should kind of get the gist. My favourite line in all of the book is this one from Loyal's mother, about life: "I pitied her so bad, that her life had taken this terrible turn. And when it came at me in the same way I felt like... I still can't say what I felt like. But I know one thing. You're never ready for it when it turns on you and goes for the throat." Because, truth, but also Proulx writes so well about when life goes for the throat and this book is no exception.

So yeah, Annie Proulx, look into her. This isn't my favourite of her books, but the fact that it was kind-of short stories definitely saved it from hurting my brain (I really didn't like The Shipping News, for example). This is more of a recommendation to check out her work as a whole rather than this, or any particular book, although I will maintain that her short stories are just better. This was fine, and I'm glad to have struck it off of my giant pile of books to read, which was part of the point of this challenge so SUCCESS! Huzzah, etc etc.


*See also Brokeback Mountain- it's a thirteen page short story but is set over YEARS- also the movie is absolutely the reason I started reading all of Proulx's books, no biggie.