The London Bookshop Crawl, to the uninitiated, is that beautiful time, once a year in February, where book lovers descend upon London to BUY ALL THE BOOKS (and meet people and usually eat cake, but mainly, you know, BUY ALL THE BOOKS). This is, without a doubt, my favourite event to have come from the internet, and it doesn't hurt that it's organised by my dearest Bex which not only means I get to be super proud of everything she does (which is A LOT) but also means that I get to spend a whole damn weekend with her (and also the lovely Katie) which is GREAT!

The Bookshop Crawl this year was bigger than ever before, with about a bajillion bookshops taking part over the Friday-Sunday long weekend. There were also more events than ever before- a Notting Hill tour and author event on Friday that I had to miss because of work, guided groups on Saturday morning, and a book swap brunch (that I skipped) and British Library tour on Sunday. SO MANY THINGS, so much enjoyment. I love that it's so free and easy, so if you don't want to do anything structured, you can still do your own meandering tour and benefit from all the discounts, goodie bags, and various other treats that Bex secured for lucky lucky book lovers.

I, of course, wanted to do some structured things, because I'm really in this for the friendship thing (and the books. THE BOOKS!). Bex was leading a group around Kew and Richmond in the morning which, conveniently, was the nearest group to my flat, and it was really nice not having to be in central super early cause that would have involved getting up eeeeven earlier on a Saturday. After getting lost trying to find the meeting place, we (I took my boyfriend cause why not) met with the group and proceeded to frolic around the Kew and Richmond area which was FAB.

I have no pictures of this because why would I, a blogger, think to document anything. Ahem.

Anyway. We went to a couple of bookshops in Kew- The Kew Bookshop and Lloyds of Kew, and then went onto Richmond to the sweetest children's bookshop with the best goody bags, and The Open Book, which had the other best goody bags. After a lunch pitstop, Bex, Katie and I, plus assorted men folks, went on up to London so that we could take advantage of the Forbidden Planet goody bags, plus pay a quick visit to Oxfam Bloomsbury and the London Review Bookshop. PHEW. 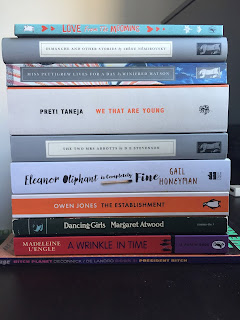 I love them all dearly, and I haven't even read any yet. Special mentions for finally buying Bitch Planet 2, and A Wrinkle in Time, which I really want to read before the movie comes out. Also yes I managed to find three persephone books, only one of which was full price *winning smile*.

And that was Saturday.

Sunday, before I was at all ready, I was back in London for the British Library rare books tour. This I *did* take photos of, because it was basically the biggest highlight of my life. Our tour guide, James, was awesome, and took us on a really thorough tour of the library, and OMG it's so cool, you guys. We started with a history of the building itself (it had to be put in a really specific place to avoid, like, 4 tube lines), and then had the amazing fortune of being allowed into the reading room because it was a Sunday, when the room is closed to the public. 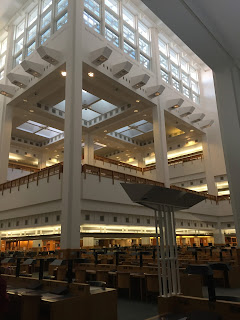 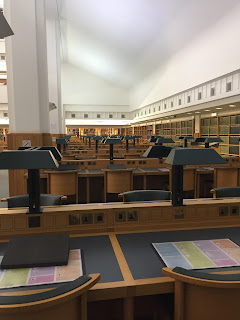 Obviously I'm now desperate to become a member and just work in the British Library because I can... and those chairs cost £500 each, by the way, just to make sure that people working there are comfy. 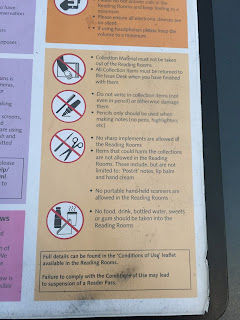 I mean, honestly the reading room is basically everything to me, but there were other parts of the tour, I guess. We also had a look at the King's library, which is the centrepiece of the library and is literally the collection of King George III, who, it seems, was practically the only literary King. 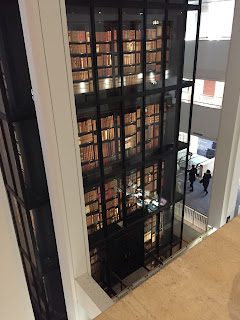 It's awesome looking, but it's also a working part of the library, and if someone orders a book for perusal, it's possible it may be stored in the King's Library. Our tour guide told us that, although (practically) no one is allowed inside, they're looking to make it a part of tours in the future, and I really really hope they do! 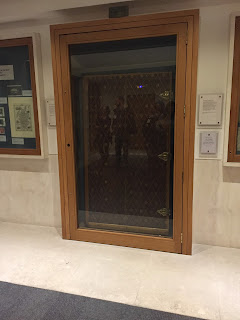 That is the world's biggest book. You're welcome.

We finished the tour by looking at some of the Treasures of the British Library. This was a pleasant surprise for me, cause I have been into the collection before, but of course it was better with an expert telling us all about select pieces. The Treasures exhibition, by the way, is free to the public and open like all the time so yeah, you should go to that. Jane Austen's handwriting is in there, plus, you know, the Magna Carta and stuff so that's pretty cool.

After the British Library, Bex, Katie and I, plus paramours and children were by ourselves again, to finish out the weekend. After a quick pitstop for cake, we walked over to Word on the Water, which was my absolute favourite bookshop from last year (which I never blogged about...) and which is, as the name may suggest, a bookshop on a boat. I love it- I didn't buy any books, but I still love it there. We finally- FINALLY- went to a pub Shakespeare drank at for dinner, and then it was time to go home, so tired, but so happy.

And that was the London Bookshop Crawl of 2018! I always have a wonderful time, and this one was no different. I'm excited for the summer one (it's in Canterbury this year), time permitting, and even though I had basically no downtime this weekend, it was still very well spent.
Posted by Laura at 19:48