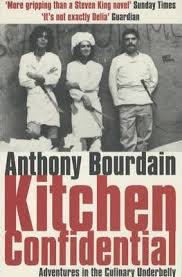 Are you easily offended? Anthony Bourdain sees you, and he doesn't give a shit. Kitchen Confidential is part memoir, part behind-the-scenes look at the restaurant industry, and a whole lot of brilliant. Bourdain seems like a natural writer, which I would imagine is reasonably rare in a chef, so he seems uniquely poised to deliver such a good book, and boy does he deliver.

I'll start by saying this- Bourdain seems like kind of a dickhead. He yells at his staff, he was a total idiot when he was young, he's just not a super nice human. He even says this about vegetarians: "vegetarians are the enemy of everything good and decent in the human spirit, an affront to all I stand for, the pure enjoyment of food." (Don't even ask about vegans, he refers to them as the "Hezbollah-like splinter faction" of vegetarians because he is mean and this book is sort of old). The fact that he's kind of a dickhead though kind of doesn't matter, mainly because he acknowledges it himself (self-awareness is fab) but also because THIS BOOK IS SO GOOD.

I've been trying to pinpoint exactly why it's so good, and I think there are quite a few different elements that combine to, honestly, a near perfect book. There is, of course, the excellent writing, which creates the perfect tone, but that's not all. Each chapter of the book is kind of like a little essay- some are quite straightforward autobiography, whereas some contain invaluable advice, like how not to open a restaurant, and how not to eat at restaurants (never have seafood on Mondays! Who knew?!) Bourdain even managed to make me completely stressed out by describing a day in his life as head chef of Les Halles- does he get to rest? Not even a little.

My very most favourite part of the book though comes towards the end. Having been very essentialist throughout the book, Bourdain then tells the tale of a different chef, equally if not more successful than him, who, for example, doesn't have a loud, hectic kitchen, doesn't sort-of abuse his staff to get results, and who took a failing restaurant and turned it around (something Bourdain basically says is impossible). What I really like about this is that Bourdain is smart enough and big enough to say- I know what I've said so far, and I've made it sound like it's the only way, but actually it's only one way and I appreciate that. I think it takes a ton of insight and intelligence to realise that your way of life is not the only one.

Also there's a chapter about Japan and Japanese food, so SOLD.

To summarise- Kitchen Confidential is excellent. It's 18 years old, so you've probably read it already, so if you'd like a backstage look at restaurants, want to read about mouthwatering food, or just want to read a really really good memoir, then you should definitely read this.