Oh hai, May! Is it just me, or is this year being ridiculous? Like January was the longest month ever but that was basically yesterday and now suddenly it's May? It's probably just me, but, you know... Go home, 2018, you're drunk.

April was a bit of a dud month blogging wise which means, as it often does, that it was a FAB month, life-wise. I only had 11 days at work all month, and they were beautifully spread out, and consequently this is my first full week at work since (the week of) 19th March which is making it hard (and, as I write this, it's only Monday!) April though... it was filled with wonderful things and a whole new-to-me country, and HAMILTON and so much not-working (don't underestimate the sheer joy of not-working!) and ugh yes. JOY! It was a really good month, ya know?

The blogging may have been lacklustre (or just... lacking), but the reading was pretty good! There was definitely a gap in the middle where I was just doing All The Things except reading, but the readathon reaaaally boosted my numbers up and I ended up reading 10 books. Not too shabby, right?! Let's look at 'em: 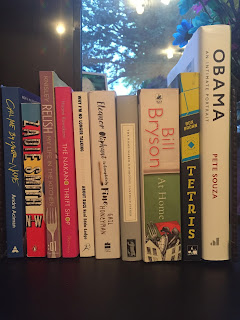 Call Me By Your Name by Andre Aciman
In case you haven't been around here at all, I have a tiny (huge) obsession with the movie Call Me By Your Name. It's been in my life for less than 2 months but it's pretty much my first and last and everything right now. I am, at this moment, trying to decide if I have enough time to watch it tonight (answer: yes, but only if I finish this quickly) and that's pretty much just my life now. I held off from reading the book because there were some things about it that made me feel a bit uneasy, but realistically I held off for literally less than a month before reading it so, you know, obsession time is weird. The book is pretty good- the film is faithful to much of it- but I couldn't help but feel like I was just experiencing a much lesser version of the film. I actually wrote a blog post about this but became too lazy to type it (yup) so perhaps one day you will know all of my thoughts, or perhaps I will keep my overthinking obsessive mind to myself, who can say.

N-W by Zadie Smith
Oh Zadie, Zadie, Zadie. I know that this book was good, I just can't remember all that much about it. Its split into 4 parts (I remember that much), each focusing on a different character living in N-W London. One of the sections is set up really interestingly with a character's life story told in tiny snippets, and I just really enjoyed the level of introspection that was happening. Basically, this is definitely Zadie Smith-good... I'm just going to have to read it again to work out exactly how!

Relish by Lucy Knisley
I love Lucy Knisley. Have I ever mentioned that before? (Yes) This was my very first re-read of the year, basically just because it was nearly my birthday and this was exactly what I wanted to read? So I did. It remains as wonderful as ever, and I intend, as ever, to make all of the recipes included in it, someday. MOST EXCITINGLY Knisley put the cover of her new book on Instagram today, and February 2019 can't come soon enough!

The Nakano Thrift Shop by Hiromi Kawakami
Hmmm... This book was strange. I mean, it's Japanese fiction so of course it's strange, but as well as being just regular strange, this was kind of strange in terms of storytelling. It's supposed to be a love story, and it is, kind of, but it felt to me that everything hung together really weirdly, which is to say, it didn't at all, really. I think I did like it as I was reading it, which is something, but I also don't think it was that great now? All of this makes complete sense, right?

Why I'm No Longer Talking To White People About Race by Reni Eddo-Lodge
I chose to read this book as my holiday read because I'm a super fun chick BUT ALSO because I bought it not long before and couldn't bear to not be reading it anymore. This book is fabulous, but more than fabulous, it felt like I was reading something that was really important. Something that I, as a white person, definitely needed to read, and something that other white people, but also just other people need to read. Eddo-Lodge is incredibly honest and doesn't pull any punches while talking about the way race is perceived and treated by a variety of groups and in a variety of mediums. I really can't overemphasise how much I want everyone to read this, but more than that, how important I think it is that they do. DO IT.

Eleanor Oliphant is Completely Fine by Gail Honeyman
This is a book that, given too much time to think about it, I'm not going to think is very good. It's not a masterpiece, it's a bestseller - but what that means is that it's immensely readable and entertaining and omg so upsetting, I'm not going to lie. I read the majority of this on the flight back from Naples, and it made it go SO QUICKLY, so there's that for a start. Eleanor Oliphant is an outsider of epic proportions, and after growing up in care is literally incapable of forming relationships with other people. After she finds the love of her life (who she has never spoken to), she undergoes a journey of great changes that eventually lead her to see the parts of her that really need changing. You know what? This is entertaining as hell, and how else do you make a flight go super quick? Bestsellers are it, ya know?

The Home-Maker by Dorothy Canfield-Fisher
THIS BOOK WAS AWESOME and I'm going to write something fuller about it if I can. For now, though, this is a book about how stupid gender roles are, and how difficult they are to overcome (especially in the 1920s, when it was written). Although this was written in the 20s, there were parts that felt incredibly relevant to now, even, and it made me wonder how far we've really come in terms of thinking beyond gender (answer: not very) and AGH it just made me think about so much, it is so good. Persephone Books, you guys- they're always great!

At Home by Bill Bryson
Oh hey, I reviewed this yesterday (aka I just wrote this title and realised that I really had to review it now or never). It's Bill Bryson, what more is there to say? Everything he does is perfect, even if I didn't know I cared about the thing he was writing about until he was writing about it. It's brill, basically. BRILL.

Tetris: The Games People Play by Box Brown
I bought this book last year at the Oxford Bookshop Crawl, because, I figured, how could a book about Tetris and its history be bad? Bad this wasn't, but great? It also wasn't. I didn't really love the drawing style, just for a start, but for me the problem was really that I didn't actually find the story of the origins of Tetris that... Interesting? There's a lot of Russian government officials and rich white men and deals that I didn't quite get (not, I think, because I'm stupid but because they weren't very well explained). I found the stuff about the science behind why Tetris is so addictive fascinating though, but overall I would probably rather have spent the couple of hours playing Tetris than reading this.

Obama: An Intimate Portrait by Pete Souza
I feel a bit cheeky counting this as a book when it's mainly (fabulous) photos, but hey it's my blog (and I'll cry if I want to). This book is wonderful, and was quite literally 8 years in the making- it's kind of a compilation of the best photos taken by Souza, the official White House photographer, over the entire Obama presidency. It also does what it says on the tin- it provides a very intimate portrait of Obama and his presidency, both photographically, but also through Souza's insight into Obama's life and work. This insight isn't overbearing, but it is there, and brings something a little extra to all of these amazing images that he managed to capture. For reals this is a great coffee table book, and so much more than I was hoping it would be.

And that was the month in reading! I liked it, it was pretty good, although still not as good as the month in life. I just love April so much, you guys.