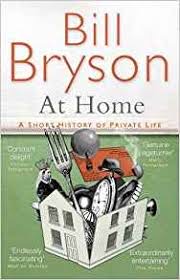 I really have to thank blogging for introducing me to Bill Bryson. To be honest, I really have to just thank Alley, without whom Bryson may just have been 'that guy who wrote that good book about Shakespeare that one time' (his Shakespeare biography IS really good, to be fair). I love Bill SO MUCH, and I'm really just trying to slowly work my way through his works for fear of running out of them too fast.

At Home, I have also been putting off because it's SO LARGE. It's too big to carry anywhere, so for pretty much all of April it's been my at home (ha ha) book while I've been whizzing through the smaller books I take on the bus. If I have one complaint (and I'll get it out of the way so I can talk about all of the great things!) it's that there's not all that much Bryson personality in this book. He's not being super grumpy because he's truly fascinated (I think) by everything he's discovering, but also because, I guess, this is typical of his history/science/research-y books as opposed to his travelogues which are about his travels, and ok, I withdraw my complaint.

SO! At Home is a short history of the home throughout the ages. This book is thorough- Bryson pretty much goes from pre-history all the way through to the Victorian times (I think the assumption is that from the 20th Century onwards, we've pretty much been living as we do now, which is both true and not, I guess) and basically how the home became the home. I learnt so much from this book, most of which I've already forgotten, but like for example did you know that comfort wasn't really a thing for people until at least the 1700s and no one had sofas and OMG can you even imagine the horror of a life in the not-now times? Me neither.

This book has a really good mixture of famous architects/furniture designers/politicians (Monticello sounds pretty amazing) and their lives/contributions to the home, as well as the histories of famous buildings, and then just the general social history of how people used to live, and how technological advances made huge differences to peoples lives that we can hardly even envisage. I was just so damn interested by everything in this book, just like I always am about things in Bryson's books, even if I'd never really thought about them before. I mean, I love me a bit of architecture, but did I think I wanted to know about toilets in olden times? I didn't- but I did! I'm pretty sure Bill Bryson could make me interested in pretty much anything, and I hope he wields this power responsibly.