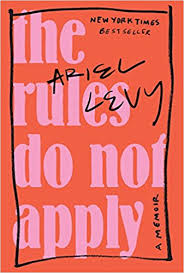 Oh, you guys. It was all going so well and then I went and did that thing where I disappeared from blogging for weeks (for no good reason, other than finishing The Count of Monte Cristo, which took some ATTENTION!) and now I can't at all remember most of the things I still need want to review... Bear with me, because this could be a bit of a rough ride.

It's not just a laziness and a giant 19th century French novel that has kept me away from writing this review in particular, though, as I was primed to write it when I was all about the blogging a... while ago, and then I read a review of this book that was less that satisfactory. I won't link to it because I found it kind of mean spirited, but it talked a lot about Levy's privilege and the fact that her problems are things that a lot of people have to go through with less, you know, resources and stuff than her. Which is fine, but frankly I don't think said writer of the review would cope very well with giving birth to their non-viable (too premature) baby all alone in a far away country, and would probably write their own pain out about it too, ya know?

Ahem. Anyway. The Rules Do Not Apply is Levy's memoir, it is her story, and her struggles should not necessarily be minimised because they are not as serious as others' (IMHO). Levy is a writer for The New Yorker, which I realised basically straight away because of her writing style and also the fact that I think I've read the stillbirth part of her memoir before and it was indeed published in The New Yorker. She is, above all other things, A Very Good Writer, and if this is not clear after almost 8 years of blogging (oh my) this is something which I value above most other things when reading a book. Did her writing skill ALSO make me a little mad at the reviewer (who didn't really mention that?) Sure, a little.

So yes, Levy can turn a sentence, and she's also a little annoying. I found myself mildly grateful that I don't know her in life, because the aspects of her personality that she proudly talked about as having been there since childhood were also those I find kiiiind of annoying in an actual real life person. Not to give too much away, although I personally don't really think of spoilers as applicable to memoirs, but I also felt like her partner made allowances for her that she did not, in return, make for her partner. They were different allowances, sure, but still. Still.

But then, on the other hand, memoirs are a little hard to review in a narrative sense really, aren't they? These things happened, and this is now the writer's perception of them, and whether I agree or not with her choices or actions or whatever, it doesn't really matter, nor make a blind bit of difference to the outcome of them. It also comes to a point where you're kind of just judging someone's life, and that's not reallllly a cool thing to do, you know? Yeah. You do.

So, anyway. Excellent writing, if a slightly annoying writer, and I'm not sure if it's life affirming in any way, but does serve as a pretty good guide of what not to do as a person (in some parts, others are just kind of devastating). I think I liked it more than this review makes it seem immediately after reading it, but time and hindsight and one really mean review are excellent moderators of memory/feeling - but let me know how you felt about it, if you read it, below?
Posted by Laura at 00:35