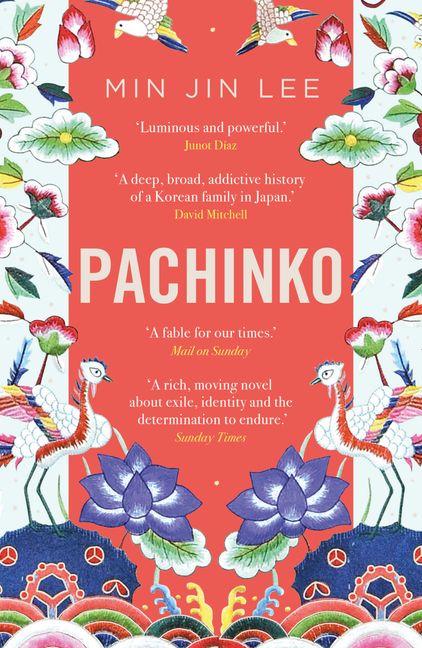 Pachinko is another book that I read ages ago now and so pretty much have to rack my brains to review. Bear with me, it's going to be... Interesting.

Pachinko is a really ambitious and wide ranging novel, covering 4 generations of one family spanning across two different countries. It's a love story and a poverty story, a story about mothers and children and a story about men and the choices they make. It spans quite a large time period too, I want to say most of the 20th Century, and it's so odd to me that I can hate historical fiction that takes place in, say, the UK, but looove historical fiction that takes place in other countries. I suppose, not really knowing the history of these countries, to me it feels more like history than fiction, which is maybe not a good thing!

Speaking of history though - I feel like (actually, know) there is so much I don't know about the world, and this book just revealed my ignorance on the history of Korea and Japan. Like, did you know that there is serious beef between the countries? And, when a country is as powerful as Japan certainly was, and kind of still is, that pretty much equates to the squashing and suppression of an entire group of people, i.e. Koreans in Japan. Koreans had to register as citizens every year on their birthdays, for example, and were passed over for the best jobs, homes etc etc for their heritage, even if they were born in Japan and/or grew up speaking only Japanese. I like Japan a lot because of their current policy of non-engagement in conflict (because of the horrors of Hiroshima, pretty much) but it's worth remembering that they haven't always been the kawaii nation that they now kind of are (in my brain).

Pachinko, then, is the story of one Korean family's struggles against their Japanese oppressors and their attempts to just live a life and not have to take too much shit. The story begins when a Korean woman is seduced by an older man who gets her pregnant, and a travelling minister offers to marry her and raise her child with her as his own. The story of this, and of her child and his later struggles, is at the centre of the narrative, but I wouldn't necessarily say it's the most important - practically all members of this family get their say at one point of the novel, and they all have a unique and interesting perspective on their world.

Basically this was huge and interesting and I feel much better informed about Japanese-Korean relations than I ever have been before (in that I am informed at all). I wish I hadn't read it so long ago so that I could tell you more interesting things about it, but alas I am terrible and terribly behind in reviews. I was very engaged by this though, and even though it's quite a big book I still felt it was worth carrying around with me, so for whatever that's worth, that's how I felt about it. Read it, it is good.
Posted by Laura at 00:02