What the flippity flop, it's March!

We had a ridiculously warm end of February that I was not complaining about because I knew, as has happened, that it would soon turn to shit and we'd be freezing again. Lo and behold, I am currently under a duvet, with a heater on, because BLOODY HELL it is cold. Also yes hello I am English, we do talk about the weather A LOT, huh?

February! It was a month. I had to work later than usual this month (9-5 as opposed to 8-4) to cover things while one of my colleagues were off, and honestly by the end of it I was in SUCH A BAD MOOD. This was for a variety of work reasons, but mostly it was just mood mood moodily mood, come home, watch Brooklyn 99, all is well (ON WHICH: I know you all know about it, but this is my first time watching it and OMG what how is this so good and funny I just can't what I gimme more yes AGH!). This past week I have been back to normal hours and have, on the whole, been much more pleasant to be around which is good good good.

Working different hours gave me extra time on the bus, so I'm surprised I didn't finish more books, but on the flip side quite a few of the books I read this month were quite weighty (1200 pages of Harry Potter, yo!) plus I had all of that Brooklyn 99 watching to do! I also joined a gym (!!) this month for the first time in my adult life, which is about half reading time (on a bike) and half not reading time (on the rowing machine/stairs because I spend my time on those mostly longing for death). It has actually been good and I feel a lot more energetic in a general sense so this is ALL GOOD STUFF.

WOULD YOU LIKE TO SEE THE BOOKS I READ? You definitely would. 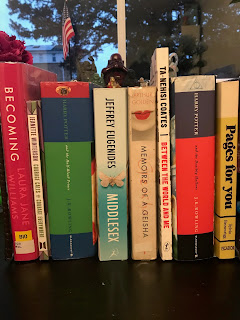 Becoming by Laura Jane Williams -  Oh man. My best friend and I have a mild to moderate obsession with Laura on instagram because honestly she is filled with positivity and joy and is just a delight in general. I was really excited when I saw this book in the library whilst getting Japan guidebooks (yasss buddy) and then I read it. And... Well. It's not like it's the worst thing I've ever read or anything, and there were definite moments of excellent insight, but there were a few too many people telling the author how amazing she is, and too much sort-of-bad dialogue for my liking. I wanted this to be so much better than it was, and on the whole I think I'll stick with her instagram.

Courage Calls To Courage Everywhere by Jeanette Winterson - This teensy book was a bit of a delight - a manifesto by Jeanette Winterson on, ya know, women and their rights and all of that kind of stuff. ALL OF THE GOOD THINGS, basically. The book also contains a speech Millicent Fawcett gave in the early 20th Century supporting and promoting the vote for women which is disarmingly modern and still relevant (why is it still relevant?!) Very good and feminist stuff.

Harry Potter and the Half Blood Prince by JK Rowling - The Harry Potter re-read continues! It's dangerous and serious and all very terrifying and stuff, and, you know, still so very good. So very, very good.

Middlesex by Jeffrey Eugenides - This month became something of a month of re-reads for me (I ain't mad about it) and Middlesex was the most surprising of these for me in that I had hardly remembered any of it, and what I did remember almost ruined it for me (in a certain way, to be revealed in my full review!) I really FELT those 8 years that passed since reading it last, and I'm not sure that was in a good way!

Memoirs of a Geisha by Arthur Golden - THIS one I remembered pretty well (I have read it... more than once before, although the last time was maybe before I read Middlesex so, shrug) and, you know what, it's still gorgeous and amazing and... I obviously now have some feelings about a white man speaking for a Japanese woman but then also at the same time he makes it clear he's done his research and... More hand-wringing in the real review, I guess!

Between the World and Me by Ta-Nehisi Coates - Not a re-read, but a future re-read, I think! This is another 30 before 30 book, so gets a full review, but this one really packs a punch - a black father's letter to his son, you can really feel the fear and anger in Coates' history, and this somehow manages to be both personal and global at the same time. We'll talk about this soon, ok.

Harry Potter and the Deathly Hallows by JK Rowling - Oh man. Was this book always this good or did I just really need some Harry Potter in my life as comfort as I approach 30? EITHER WAY, this was so good. I had so much fun with this book (and tears, and stress, and so on), and even the camping didn't feel as tedious as usual. Having watched the films leading up to Christmas last year also, I was impressed all over again by the last two films which are kind of ok-ish. HIGH PRAISE, huh?

Pages for You by Sylvia Brownrigg - My friend lent me this book and sold it to me with the promise that it was the lesbian Call Me By Your Name so, you know, SOLD. This is the lesbian Call Me By Your Name in the sense that an impressionable youth has a relationship with an older (but not, like, disgustingly older) academic, but it's also a lot more... sexual than CMBYN. Whilst CMBYN is almost the whisper of a relationship that could have been, Pages for You is a burning love affair that fizzles out, that just isn't quite there, that doesn't quite make it... Ok, I guess that does sound pretty similar, but this one isn't in Italy. ANYWAY - it was good, I liked it a lot, definitely worth a read if you come across it and want to relive teen/20s love affairs.

So, yeah. Life, life, I like books. Bookie bookie book books. Happy basically spring everyone! We made it (ish)!
Posted by Laura at 18:49